NEW BRUNSWICK – Stealth and secrecy pervade this redistricting commission pow wow at the downtown Heldrich Hotel, where Democrats have retired to one second floor conference room and Republicans shut themselves up in another.

At issue for this ensconced duopoly is ostensibly a legislative map for the State of New Jersey and the deadline is this coming Sunday.

Democratic Party counsel Bill Castner ascends the stairs alongside the man everyone here is focused on, and that is Rutgers University Prof. Alan Rosenthal, the tiebreaking 11th member of the redistricting commission.

“Sorry,” he says in regard to the lack of transparency in the process.

A Republican source tells PolitickerNJ.com that Rosenthal may be close – as early as today – to showing both sides a compromise map.

The GOP wants more competitive districts so it can help win a majority for the first time in a decade.

A Democratic Party source is giddy with the fallout from yesterday’s Christie cameo, eager to spin the story that the GOP commission is an emasculated wreck in the wake of Christie planting his soles on the carpet here, a tale Republicans say is nonsense.

Here comes Rosenthal again. He just left the Democrats on one side and now he’s walking across the carpeted hallway toward the Republicans.

This is getting ridiculous.

Three reporters pounce on him.

“Don’t you have anything better to do?” he asks, and moments later acknowledges, “Everything I say is quotable.”

He huddles up with Republican redistricting commissioner Bill Palatucci and then disappears again behind closed doors.

If you look through the peep hole of the Democrats’ conference room, you can see the backs of the members and their attendants as they hash a map. Cross the big hallway, close an eye and look into the GOP peephole and you get the back of a projection screen that blocks out the action in the room.

“They didn’t get you the executive suite?” a voice sounds, and the press turns around and watches Democratic Party counsel Angelo Genova bound across the carpet, make the rounds of handshakes with reporters and then rebound back behind closed doors. 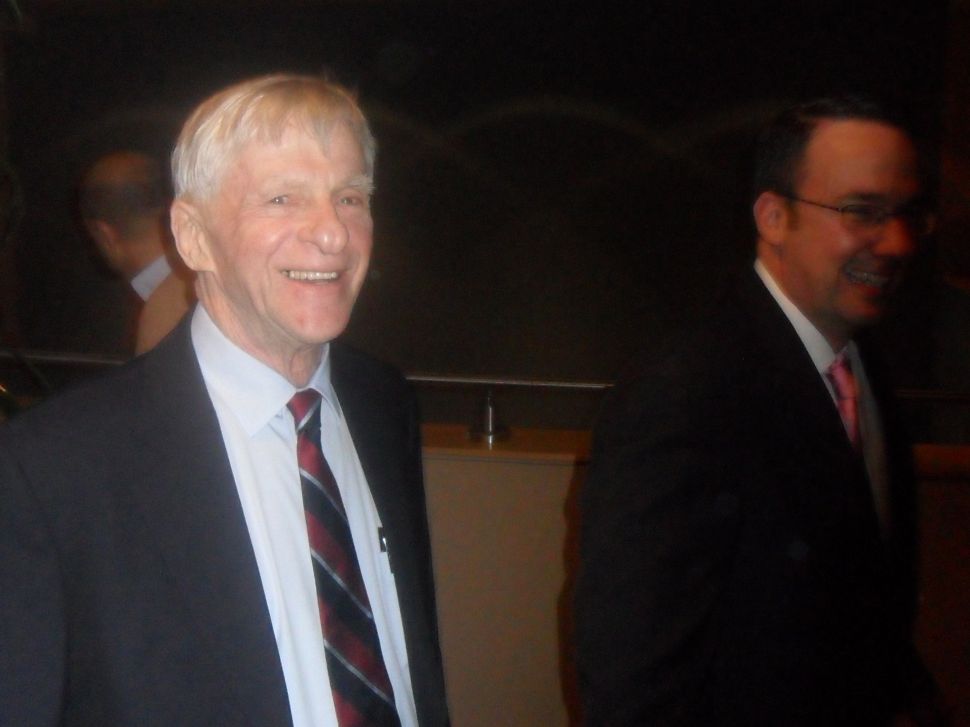