THE IRONBOUND – Newark insiders say the April 27 School Advisory Board race has the potential to be the most competitive and important city contest in nearly a decade.

“We’re in the national spotlight, how great is that?” For Our Kids ticket candidate Tave Padilla asked a crowd of East Warders Tuesday night at the Mediterranean Manor in the Ironbound.

The confluence of $100 million of Mark Zuckerberg foundation money and the education reform designs of national media stars Gov. Chris Christie and Newark Mayor Cory Booker meet the jagged edges of street politics in this local drama, which boils down to North Ward Democratic leader Steve Adubato and For Our Kids on the one side and South Ward Councilman Ras Baraka and the Children First Team on the other.

For Baraka, who is employed as the principal of Central Ward High School in addition to his job on the council, the fight is for increased community control of the school system at a volatile time, when Christie’s Acting Commissioner of Education Christopher Cerf and Booker want to employ a reform agenda; a “conservative Republican” agenda, in Baraka’s words.

Although Cerf appeared at a community event this past Saturday and attempted to blunt the headline trauma he suffered when the Star-Ledger revealed that a company he founded earned $500,000 from a California foundation at the behest of Booker to undertake a city schools study, Baraka doubts Cerf’s ability to be a fair dealer.

The founder of nationally recognized charter schools as an alternative to Newark’s failing schools, Adubato’s vision – at least on paper – is not dissimilar to some of what Cerf advocates. The difference is Adubato has been implementing reform models for four decades in his native north ward. But the Baraka forces see the Cerf/Christie/Booker overlay as a way to ascribe a losing narrative to the rivals, sink Adubato’s ticket, and with a three-candidate sweep next month, seize control of the nine-member advisory board.

Constitutionally, it might not matter much who wins the non-paying school seats.

But it’s a symbolic, bully pulpit projection that counts on a fractured landscape.

“The mayor and present governor are arranging a way to have schools turned over to them,” said Baraka. “It’s important to get reformers who should drive the reform from the neighborhoods. The state (which oversees the schools system and elicits only advisory input from the school board) has had 15 years to give the opportunity to parents.”

It hasn’t happened, he maintains.

So he doesn’t hesitate to embrace the reform mantle for his ticket – and leaves the charter option open – but he breaks hard from Booker and Christie on the subject of vouchers.

“I don’t support vouchers at all, and  there is going to be a line drawn regarding and whether Newark is going to turn into a tiered school system like Detroit,” Baraka said.

As for Cerf, “He should resign,” added the public high school principal.

“I am a woman cultivated in excellence,” declared Pernell. “A woman – and yes, a doctor – is in the house.”

They want 1,400 votes out of here in the East Ward to complement their northern and north central bases of operations – a big turnout in those wards at the very least – to check Baraka’s base numbers in the South Ward and southern portion of the Central Ward.   Marin reminded the crowd that if they don’t re-elect her, the East won’t have a seat on the advisory board.

“The rebirth of a city will not take place until we deal with the problems of education,” said East Ward Councilman Augusto Amador. “This is not charters versus public education, it has to do with the salvation of a people.”

Also addressing the crowd were Assemblyman Albert Coutinho (D-Newark) and Assemblywoman L. Grace Spencer (D-Newark), who appear both on course to pursue re-election.   Sources close to Adubato say the political animal – now in his mid-70s – is eager for this battle. But they also worry about this one. Adubato’s search for a candidate hit turbulence early when he tried to recruit Alturrick Kenney, a former Newark deputy mayor.   Kenney ended up on Baraka’s Children First Team. And the son of former Mayor Sharpe James, who is said to have gotten Adubato’s attention and was himself potentially a candidate, John James is backing Baraka’s team. The congealed Baraka ticket, in addition to Kenney, includes former Newark educator Antoinette Baskerville-Richardson and Deniqua Mathias, assistant director of the Clinton Hill Community and Early Childhood Center.

For all of the potential national implications of this race in the context of urban education, Adubato’s allies are also painfully alert to the dead weight – at least in terms of local politics – of the Cerf/Christie/Booker triumvirate, and fear Adubato getting swallowed in that dynamic.

“I know we have a big fight ahead of us,” admitted Marin.

“I don’t want anybody to proxy for me,” he said, referring to his candidates. “The other side is putting out a ticket of business people and operatives as opposed to people who have been active in education. What is their historical relationship? Are they motivated because a political operative asked them to run?”

But now there are even bigger looming targets for him than the man in the old Victorian mansion on the hill.

Standing on one side of the divide, with Adubato sitting down front last night at the manor and Booker absent utterly from the discussion, Padilla, in a play away from the politics that inevitably penetrate and permeate, said, “This election is solely about 40,000 children who go to school in Newark. It’s solely about the children.” 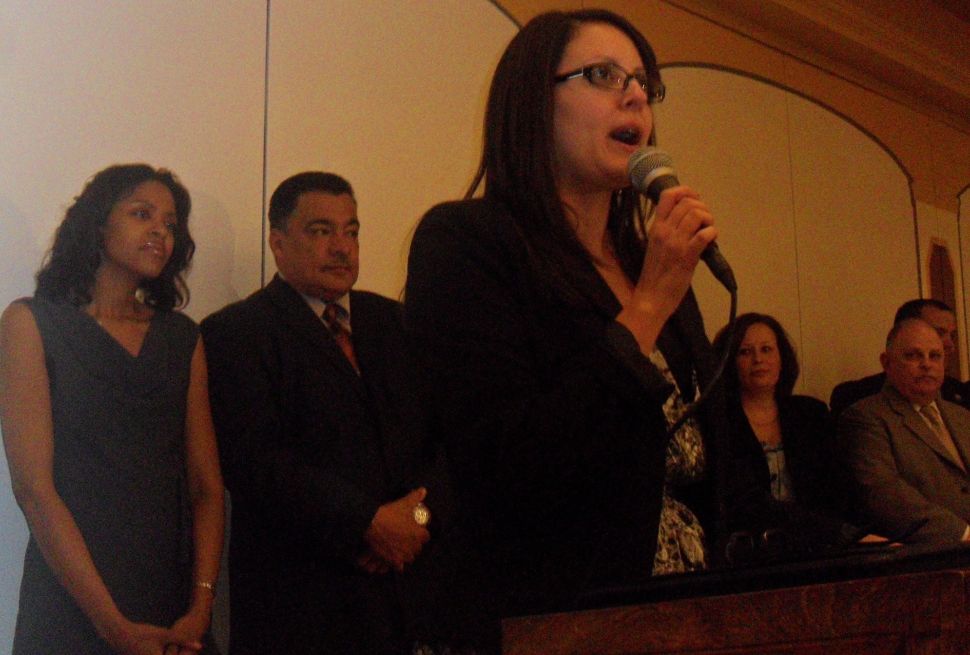