As map buzz suddenly puts caucus colleagues into even closer proximity – if even for just the next two weeks while Prof. Alan Rosenthal tries to synthesize a legislative map for the next decade – state Sen. Nicholas Scutari (D-22) of Linden said he doesn’t anticipate a face-off with his mentor, state Sen. Ray Lesniak (D-20) of Elizabeth.

One map alternative spills Elizabeth away from Roselle and Union and into Linden, where political observers could be treated to the ultimate gladiatorial spectacle of Lesniak v. Scutari.

“I didn’t want to see Ray retire already,” cracked Scutari, who intimated that the map is about as likely as a section of Newark getting welded to Elizabeth.

One of the rumors floating in this dead zone prior to the April 3 redistricting deadline is that if Linden gets lumped with Elizabeth, Scutari would get routed away from the showdown and into judge’s robes. But Scutari, who serves as chairman of the powerful Senate judiciary committee, said he doesn’t want to be a judge.

“Not unless they’re going to take Stu Rabner and make me the chief justice,” said Scutari. “And I love the supreme court justice.”

“I think it is very unlikely that it could happen because it is a direct violation of one of Dr. Rosenthal’s criteria, which is maintaining a community of interest,” Lesniak said.

“I’ve been told I could end up in Linden and Carteret, and I just don’t know – I’m resigned to whatever happens,” said Assemblyman Jason O’Donnell (D-31) of Bayonne. “That’s why I’m so focused on this children’s congenital heart defect screening bill I’m working on because one never knows about future legislation with redistricting. We have to work while we’re here.”

Assemblyman Albert Coutinho (D-29) of Newark said much the same thing. One Republican scenario would fasten his East Ward to Belleville and Nutley.

“I’m very proud of my service,” Coutinho said in response to a query concerning his future.

Another Republican scenario pushes state Sen. Richard Codey (D-27) of Roseland into a face-off with state Sen. Nia Gill (D-34) of Montclair, while another Democratic scenario puts him in a district that is composed of 60% Essex and 40% Morris, according to one source, which would likely give the veteran better than a fair shot at survival. Another map would give Codey just East Hanover in Morris or the portion of population he loses from Newark.

While many legislators put on their most practiced stoical faces, state Sen. Brian P. Stack (D-33) this week acted on what for him is the likelihood that Jersey City’s up swell in population will increase Stack’s JC toehold, and began distributing Stack lit complete with his cellphone number. 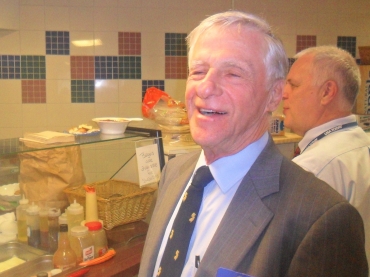