“I don’t know anyone that can question Pete’s integrity and his grasp of the issues,” Reiman said in a statement. “I am confident that he will be able to dedicate the necessary time and energy to rebuild our county organization and to ensure strong democratic victories in future elections. Our party is that of a diverse and inclusive organization that has and will continue to represent people of all backgrounds.”

A Democratic Party source said the 34-year old Reiman endorsed the 82-year old Barnes with the understanding that Reiman would succeed Barnes as chairman.

“I have said time and time again that age is not and should not be a factor in this or any other race; no candidate is too young and no candidate is too old,” Reiman said to the age issue. “Rather we must look at the qualifications and experience of the individual, and what they have to offer the constituents they serve;  whether that’s in a community setting, our county at large or within our democratic organization. Over the past few weeks I have had the opportunity to speak to many committee members and local leaders around Middlesex County and I believe that Pete has the best opportunity to unite the party during these difficult times.

“I look forward to my continued involvement in the organization and to ensure that our party is successful in the coming general election. Carteret Democrats and I stand in support of Pete Barnes in his bid for Chairman.”

Carpenters Union executive Kevin McCabe is not a formally announced candidate for the chairmanship but sources say he may get into the contest. The vacancy occured when former chairman Joe Spicuzzo resigned to answer to state corruption charges.

Another Middlesex source said McCabe’s candidacy is sinking because some Democrats are fear that his most powerful backer, Woodbridge Mayor John McCormac, is too close to Republican Gov. Chris Christie. “The new news is that the county is keeping McCormac from getting any more power by blocking McCabe,” said the source.

“Out of respect for the 1,200 county committee people, the chairmanship should be the result of an open process not a deal, both now and in the future,” said the powerful Woodbridge mayor. “I have consistently been against an elected official serving as party chairman at any level of government. The recent issue we experienced only reinforced that concern.”

Spicuzzo served as sheriff in addition to party chair. 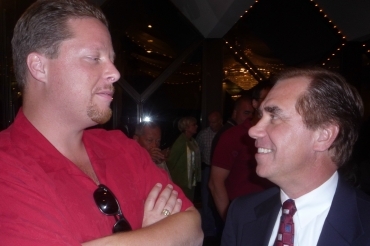