Carteret Mayor Dan Reiman wants to be the next chairman of the Middlesex County Democratic Organization.

“I am absolutely a candidate for chairman,” said the 34-year-old mayor, re-elected last year with 71% of the vote.

Reiman’s decision to announce his public pursuit of the chairmanship came hours after Chairman Joe Spicuzzo marched himself into the state police barracks to answer to bribery and improper conduct charges.

“In terms of challenging Joe that was a different story,” said Reiman, first elected to the city council at age 23, two years before he became mayor, explaining his timing in announcing today and not earlier.

“In my discussion with Joe, he had said ‘I want to be chairman for one additional year.’ Until this broke, there was no reason to believe there were any issues or concerns. As long as there were no outstanding issues, out of respect for him and his position and out of respect for his service to the county, I didn’t plan to run.

“Obviously, today’s events are a game changer,” added Reiman, reflecting on Spicuzzo’s decision, in the face of charges, to resign his chairmanship.

The  other name floating around committee circles as a potential Spicuzzo successor is Kevin McCabe, an executive with the New Jersey Carpenters Union. 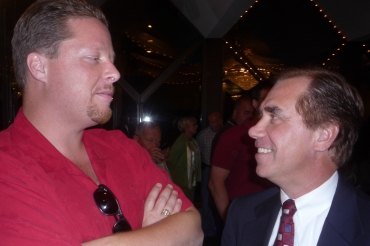