Sen. Ronald Rice, (D-28), of Newark, said at Wednesday’s Joint Committee meeting on Public Schools that he believes the process of getting construction projects off the ground is taking too long.

“It takes forever to get the shovel in the ground,” he said at a meeting held at Trenton Central High School.

He said the problem is compounded, as construction costs have continued to escalate over the years.

Sen. Shirley Turner, (D-15), Trenton, said earlier in the meeting that Trenton Central High School was first identified in 2004 as a school that is in need of building improvements, either through extensive renovations or a new building.

Rice said Gov. Chris Christie should focus more on getting the construction projects moving forward, instead of focusing on issues that don’t affect a great majority of students such as charter schools and vouchers.

Assemblywoman Joan Voss,  (D-38), Bergen, said the state needs to make sure all public schools are funded properly, that they are safe and offer programs.

About charter schools, Voss said they “have a place, but they don’t have to replace our public schools.” 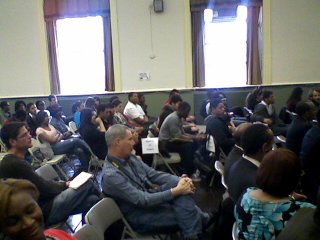