WEST NEW YORK – In the midst of a volatile backroom redistricting debate over the future of West New York, Assemblywoman Caridad Rodriguez (D-West New York) filed to run for municipal office this morning with the renegade team of mayoral candidate Dr. Felix Roque.

Rodriguez, who worked for 12 years under former Mayor Albio Sires, insisted it was more her disgust with the way Mayor Silverio “Sal” Vega is running the town than legislative reapportionment drama that motivates her to make the move from the Assembly to the local commission.

“I love to work on the ideal bill in Trenton, but ultimately, I have to come home every day to West New York, and the town is not being well run,” she told PolitickerNJ.com as she emerged with Roque and her new running mates, moments after turning in petitions to Clerk Carmela Ricci.

Roque would be a good alternative, she added.

“I don’t see a special interest with any of these people that would hold me back,” Rodriguez said of businesswoman Fior D’Aliza Frias, Dr. Count Wiley, Ruben Vargas, and Roque.

To compensate for population growth in Jersey City, some circulating redistricting maps would displace West New York from its current 33rd District – conceivably into the neighboring 32nd.

“If I win (the commissioner’s seat in May), I will never go back,” Rodriguez said. “I will say to the Assembly, I have experienced a lot of good things here, but I think I’m ready to move on.'”

After Vega fired her from her job at city hall when he took over from Sires (who assumed the 13th District Congressional seat), Rodriguez ran on the 2007 legislative ticket with state Sen. Brian P. Stack (D-Union City) and Assemblyman Ruben Ramos (D-Hoboken).

“Brian has his own election coming up,” Rodriguez said to the prospect of her powerful Union City ally lending additional support to Roque and Rodriguez in West New York. “I don’t hold him responsible for how we do. I know that deep down, he wants us to win.”

Whatever their chances of beating the HCDO – which will have the heft of City Hall behind it – Rodriguez gives Roque’s team name ID and connective tissue to the same Stack organization that decimated Vega four years ago.

“She’s really here!” a Roque partisan crowed as the assemblywoman crossed 60th Street and made her way to the Together We Can headquarters in preparation for the Roque team’s march to turn in its petitions.

Vega’s beaten Roque already – when the doctor – like Vega a Cuban immigrant – in late 2009 unsuccessfully tried to muster enough votes for a special recall election.

Today, as he and his team members filed with the clerk, Roque told reporters, “This is the happiest day of our lives. Freedom is coming to West New York.”

The Vega Team acknowledged the mayor’s re-election will not be a walkover, but insisted it will come down to Vega versus Roque and applauded Rodriguez today for what they said was her tentative presence on the ticket.

“From her comments, it’s clear that the assemblywoman is afraid that the Roque ticket is a loser and that she already has a bail out plan to get back to Trenton,” said Vega spokesman Paul Swibinski. “We commend her on her honesty.” 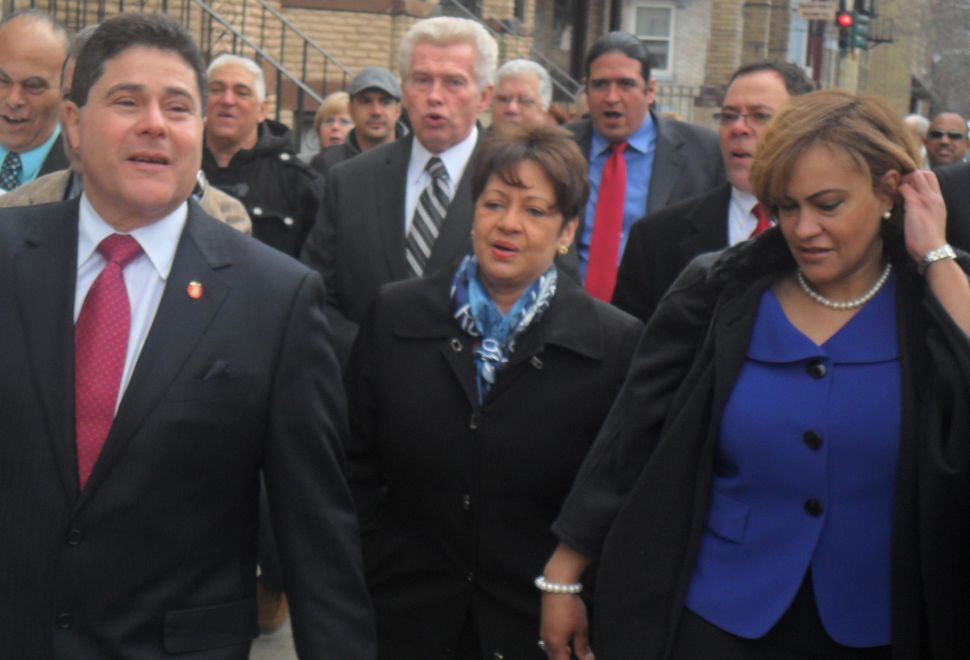