TRENTON – Tiebreaking member Alan Rosenthal made a statement to begin the public redistricting hearing, setting forth the standards he said would guide him as he attempts to establish a fair map.

“I believe there is general agreement on these standards but I can’t hold the other commissioners to those standards,” he said.

Every district has to be equal in population – or as equal as possible.

“The districts will be as equal as possible,” he said. “No single district would deviate from the norm.”

Jersey City and Newark, he wondered, considering the state’s two biggest cities. Divided no more than once.

Contiguity is also important, he said. Each district must not be scattered but reconnected with itself. Aquatic contiguity is allowable, but within reason.

Compactness. “We will stive for compactness as we can reasonably get,” he said.

Diverse communities? “We will try to recognize groups of social and ethnic,” he said.

Continuity of representation. “A substantial portion of old continues with the new one – uselful to foster as little disruption as necessary.”

Regarding minority communities, the two groups have differences of opinion on how to honor them, he said.

“It is clear that a major if not the major role is to help resolve differences and arrive at an agreement that is fair to both sides,” Rosenthal said.

“If they reach agreement, we can assume it’s fair.”

If the commission can’t do that, he would like to see two maps that are both fair and meet constitutional guidelines.

At that point, he would pick the one map that better adheres to the principles he just set forth.

“I’m honored to have been selected to be the 11th member,” Rosenthal said. “I’m the new boy on the block, maybe that’s not accurate.”

Dr. Rosenthal was on a list submitted by both Democrats and Republicans.

Apportionment occurs every ten years. The commission has a deadline of 23 days from now to complete a new map.

Redistricting Commission Co-Chair John Wisniewski, a Democrat, made a statement following Rosenthal’s opening statement. He hove closely to the parameters laid out by Rosenthal.

Then it was Co-Chair Jay Webber’s turn.

“The map must obey constitutional requirements regarding one man, one vote and the Voting Rights law,” said the Republican. “The (current) map is not proportional. Three times, Republicans won more votes than the Democratic Party, and never won more seats. That has to change.”

Regarding the entrance of Rosenthal onto the commission, “It does call into question your sanity,” Webber cracked.

Webber said there are fewer Blacks in the legislature now than there were over a decade ago.

“There may have been an erosion but there have been more minorities and I clearly stated minorities,” answered the assemblywoman, who testified with other legislators on the minority issue, including state Sen. Ronald Rice (D-Newark), state Sen. Shirley Turner (D-Lawrenceville) , Assemblywoman Nellie Pou (D-North Haledon) and Assemblyman Upendra Chivukula (D-Franklin).

“We had six Hispanics and today we have seven,” said the Republican. “This map has not produced what you claim it has produced.”

Moments later, Nora Craig of NJ 2011 Project, in her testimony, blasted what she identifies as identity politics.

“We shouldn’t be represented because you’re one color or the other,” Craig said. “I’m from the Pine Barrens.”

“We must keep in mind that the Asian-American population is the fastest growing at 51 percent and is currently at 8.2 percent, growing from 5.7 percent in 2000,” he said. “Also, Asian-American voters grew 54 percent since 2000 and now make up 8.1 percent of the total voting age population, versus 5.6 percent in 2000. In this global economy, Asian-Americans play a key role and need appropriate representation in the Legislature to promote international trade.”

It turned into a microphone mud fight between urban Dems and Tea Partiers.

Russell Codey, a Tea Partier from Keyport, blistered the map as it exists.

“It was encouraging to hear Dr. Rosenthal, I would suggest again those are paramount to everything else,” said Codey, referring to the 11th member’s citeria for finding a fair map.

What the state has now just gives urban legislators perpetual power, he said. 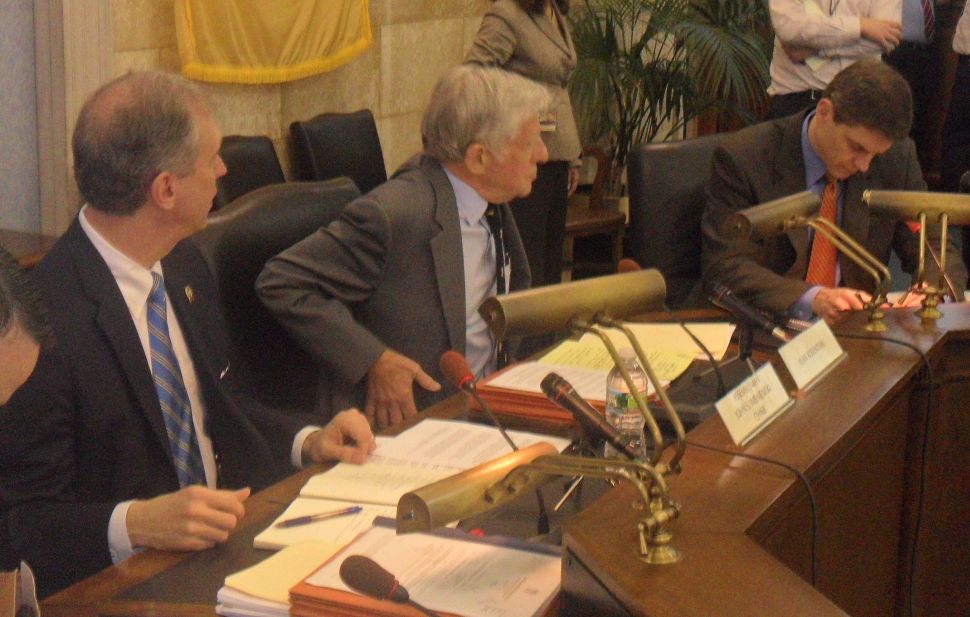