Hudson County political insiders are watching that localized firefight in West New York to see if it goes global, or least, if it goes Hudson.

The inscrutable state Sen. Brian P. Stack (D-33) of Union City stands at the center once again as the Hudson County Democratic Organization (HCDO) tries to determine whether it will be fighting a single candidate in WNY mayoral candidate Doctor Felix Roque, or an organization that stems from Stack and backs Roque.

Stack led a renegade countywide slate against the HCDO four years ago.

Sources say Bayonne Mayor Mark Smith, the affable and relatively new chairman of the HCDO, doesn’t anticipate tossing Stack off the line as the senator pursues re-election in the 2011 Democratic Primary. Smith likes the North Hudson mayor and expects to award column A to the incumbent Hudson County senators, including Stack.

But redistricting maneuvers have played havoc with Stack as he fights to maintain West New York in his district and fend off what sources says is a Democratic Party proposal that would force him to absorb more of Jersey City in exchange for shedding WNY and Gutenberg.

At least one source said Republicans – feeding on the tenuous relations Stack has with his own party – are prepared to full court press the Union City politician into a party change if they cannot get a majority GOP map during the redistricting process.

“That never crossed my mind,” said Stack. “I’ve never been approached to change party affiliation, not by state Sen. Kevin O’Toole, Gov. Chris Christie or any of the governor’s people.”

At times a critical “aye” vote for the governor’s initiatives who also lauded Christie as New Jersey’s greatest governor, Stack denies he’s ever done Christie’s bidding on a request by the governor or his office.

“The governor has never asked me for a vote in the senate,” said Stack.

Another source said there’s no need for Stack to change parties as he is a reliable Christie vote in the clutch, regardless of his party affiliation, an observation that goes to the heart of what some sources say could be the redistricting result Christie ultimately will have to choke down: one or two gains by Republicans with a map that does not change significantly, and continued reliance on cross-the-aisle allies like Stack, state Sen. Jeff Van Drew, state Sen. M. Teresa Ruiz and state Sen. Sandra Cunningham.

Stack acknowledged he doesn’t really give a damn about party.

“The party affiliation doesn’t mean a lot to me,” he said. “I don’t want to bash the governor, but again, it has never even crossed my mind to change parties.”

Sources said Smith plans to herd all of Hudson’s incumbents into a room sooner rather than later to try to pacify a situation now intensified by both the redistricting back drama and the West New York mayor’s race. 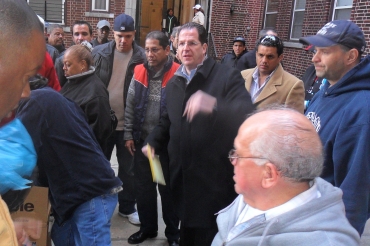