Sources say Middlesex County Democratic Organization Chairman Joe Spicuzzo has been arrested by the state Division of Criminal Justice on charges of bribery and official misconduct.

Spicuzzo’s longtime cellphone is off the hook; now a non-working number.

“He’s gone off the reservation for a few days now,” said a source close to the county chairman, who last year did not run for re-election as sheriff after Middlesex agreed to pay nearly $1 million to settle a sexual harassment suit.

Five women officers filed against Spicuzzo and the county; and the sheriff, who’d served ten terms in office, didn’t run again and backed Mildred Scott as the party’s ultimately successful candidate for sheriff.

Chairman of his party, Spicuzzo in the aftermath of the suit struggled in the face of an upswell of fellow party leaders who wanted him out of there. Against a backchatter of critics, Spicuzzo told PolitickerNJ.com he intended to run again this year.

Woodbridge Mayor John McCormac and state Sen. Bob Smith (D-Piscataway), arguably the most powerful elected officials in Middlesex County, debated what to do with Spicuzzo.

Carteret Mayor Dan Reiman emerged underground as a potential challenger to the party chairman, but today another source said former McGreevey Labor Commissioner Kevin McCabe may be interested in taking charge of a party organization that’s been badly fractured ever since former Party Chairman John Lynch went to prison.

But McCabe, former chair of the Woodbridge Democratic Party and an executive with the carpenter’s union, is a strong probability.

News of Spicuzzo’s arrest didn’t surprise core contacts in the party. Some of them had been waiting for something to break on the chairman and talked about stories of sheriff’s deputies doing work at Spicuzzo’s house on the public dime. One source alleged that as sheriff, Spicuzzo took money in exchange for supplying jobs.

The Star-Ledger reported at 9 a.m. that the chairman turned himself in to authorities at the state police barracks in Hamilton. 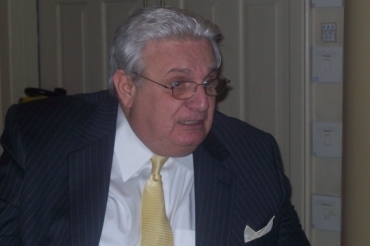