State authorities arrested former Sheriff and Middlesex County Democratic Committee Chairman Joseph C. Spicuzzo this morning on charges that he demanded bribes of up to $25,000 from individuals seeking employment or promotions in the sheriff’s office.

The 65-year old Spicuzzo of Helmeta surrendered to State Police detectives in Hamilton, according to state Criminal Justice Director Stephen Taylor, and was charged with pattern of official misconduct and bribery, both second-degree offenses. Each charge carries a maximum sentence of 10 years in state prison, with a mandatory minimum term of five years without possibility of parole.

Taylor and Attorney General Paula Dow allege that on two or more occasions from 2007 to 2008, while serving as county sheriff, “Spicuzzo demanded that different individuals pay him bribes in return for him appointing them as new sheriff’s investigators or promoting them within the sheriff’s office.  Sheriff’s officers are hired through the civil service system, but sheriff’s investigators are appointed by the sheriff.  It is alleged that Spicuzzo solicited and accepted individual bribes of up to $25,000 from new hires for investigator positions. He allegedly took bribes totaling at least $50,000.”

Party chair for 16 years and up for re-election in June, and a commissioner on the New Jersey Sports & Exposition Authority, Spicuzzo told PolitickerNJ.com last year he wouldn’t run for re-election as sheriff after 30 years in the aftermath of getting stamped with settling a sexual harrassment case with five female officers.

He served as sheriff for 30 years.

“This is an outrageous case of abuse of power and public office,” said Attorney General Dow.  “Sheriff Spicuzzo allegedly introduced young recruits to a career in law enforcement by demanding that they pay him bribes of up to $25,000.”

“We charge that Spicuzzo was selling positions in the sheriff’s office,” said Director Taylor. “Official misconduct does not get much more audacious and venal than this.”

“Offenses of this nature erode the trust that the public expects from law enforcement officials,” said State Police Superintendent Colonel Rick Fuentes. “We have to ensure the citizens of New Jersey that this type of behavior is unacceptable and has dire consequences.”

According to the law enforcement officials,  “young applicants who were trying to obtain law enforcement positions as investigators were forced to use all sources of funding available to them to pay the alleged bribes. It is alleged that Spicuzzo also solicited bribes from more senior members of the office seeking promotion to new positions.

“The investigation into alleged misconduct by Spicuzzo in the sheriff’s office is continuing, and further details of the investigation will not be released at this time.”

“Under state law, second-degree crimes carry a maximum sentence of 10 years in state prison and a criminal fine of $150,000.  Each of the charges carries a mandatory minimum sentence of five years in prison without parole under New Jersey’s statutory sentencing enhancements for public corruption.  The mandatory minimum sentence applies to certain listed offenses occurring on or after April 14, 2007 that involve or touch upon the defendant’s public office.  Spicuzzo could potentially face consecutive sentences on the charges.

“The charges are merely accusations and the defendant is presumed innocent until proven guilty.  Because the charges are indictable offenses, they will be presented to a grand jury for potential indictment.” 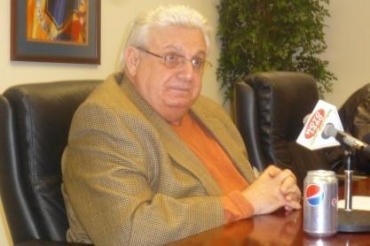