BLACKWOOD – Students rallied at Camden County College here Wednesday morning to support the Opportunity Scholarship Act, saying the scholarships will get students out of unsafe, failing schools by enabling them to attend alternatives such as Catholic schools.

Some of them who testified before the Assembly Budget Committee hearing at the college auditorium Wednesday morning said OSA would provide students a chance to attend safe schools where they could actually learn subjects. Many of them wore white T-shirts, reading Support the NJOSA.

Glenda Rodriguez, 16, said she was kicked out of Wood Wilson School in Camden after trying to protect herself when she got jumped. Since she was kicked out several months ago, she started attending the Camden Education Resource Center. She hopes to receive a GED and become a pediatrician.

“I want the kids to have a better opportunity,” she said.

Her mother, Glenda Martes, said she’s noticed a big difference in her motivation. Martes added that she feared the idea of sending her daughter to Camden High School.

Another student also said it’s important for students to have alternatives to public schools.

“It gives everyone a chance to make something of themselves,” said Rachel Barton, 13, a student at St. Anthony of Padua School in Camden.

She said the school provides a comfortable environment where learning is encouraged.

The bills that would provide money for the Opportunity Scholarship Act are S1872 in the state Senate and A2810 in the state Assembly.

“It’s geared for the urban schools that aren’t performing well,” said Monsignor Bob McDermott of St. Joseph Pro Cathedral School in Camden. He said parents pay $1,800 per year per student to attend the school. It is currently attended by 275 students.

In a press conference following the testimony, Assemblyman Louis Greenwald, (D-6) , of Voorhees, chairman of the Assembly Budget Committee, said he supports giving students stuck in “chronically failing” schools, like the ones in Camden, an opportunity to attend other schools. However, he supports a more targeted program than OSA, calling for “a program on a limited scale.” 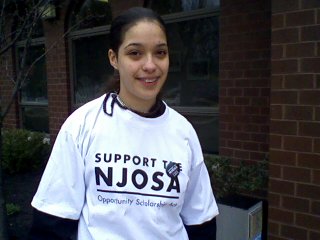