TRENTON – The jargon was thick, but Treasurer Andrew Sidamon-Eristoff did his best to put the “new normal” of state budgeting in perspective before the Assembly Budget Committee on Tuesday.

“Traditional current services budgeting has failed New Jersey,” he said. “It focuses a disproportionate amount of attention and debate on the margin – the year-to-year incremental changes in taxing and spending – as opposed to the fundamental question as to whether we’re getting appropriate performance and value out of the great bulk of our spending.

“Moreover, it supports a mindset that discounts the importance of, and accountability for, actually setting priorities, and encourages a use-it-or-lose-it mentality that drives ‘spending up to the budget.’ This results in both waste and an accretion of spending commitments over time,” he said. “The growing weight of these commitments has exhausted our taxpayers’ capacity to support them.”

Accretion? Sidamon-Eristoff went into detail about some issues everyone understands, like school spending and the millionaire’s tax, but came back to one central theme: no new taxes.

“I know that some will demand that Governor (Chris) Christie propose or accept a massive tax increase on a small number of our state’s citizens to generate more revenue to ‘save’ programs or meet speculative court-ordered spending obligations,” he said. “Although I suspect we will explore this topic at length later today, I can assure you that this governor will not sign a budget that increases taxes.” In fact, Sidamon-Eristoff told the committee that any millionaire’s tax the Legislature passes would not be met with approval by Christie.

As Sidamon-Eristoff  prepared to makes his first foray into the legislative budget season, the two parties’ budget leaders kicked things off.

Minority Budget Officer Declan O’Scanlon, (R-12), of Little Silver, said he’s seeing “encouraging signs” that the economy in the state is recovering, but it’s “too soon to credit the administration for the good things happening.”

He called the spending doc “about 100 percent pander-free” and cautioned against returning to the spending spree governance of the past: “Spending what we don’t have damages everyone in New Jersey, including those (the spending was meant to help).”

“This is one of the most responsible budgets, I think, I have seen,” O’Scanlon said.

Budget Committee Chairman Lou Greenwald, (D-6), of Voorhees, said three public hearings brought necessary feedback that the budget teams will use as they head toward the June 30 deadline. The most important issues discussed at the three meetings were education services for the blind, education cuts in general, property tax issues, women’s healthcare funding, and loss of services for children, senior, and disabled persons.

Last year’s budget, he said, resulted in “the highest property taxes in the nation growing higher” – a “painful increase” for everyone across the state. 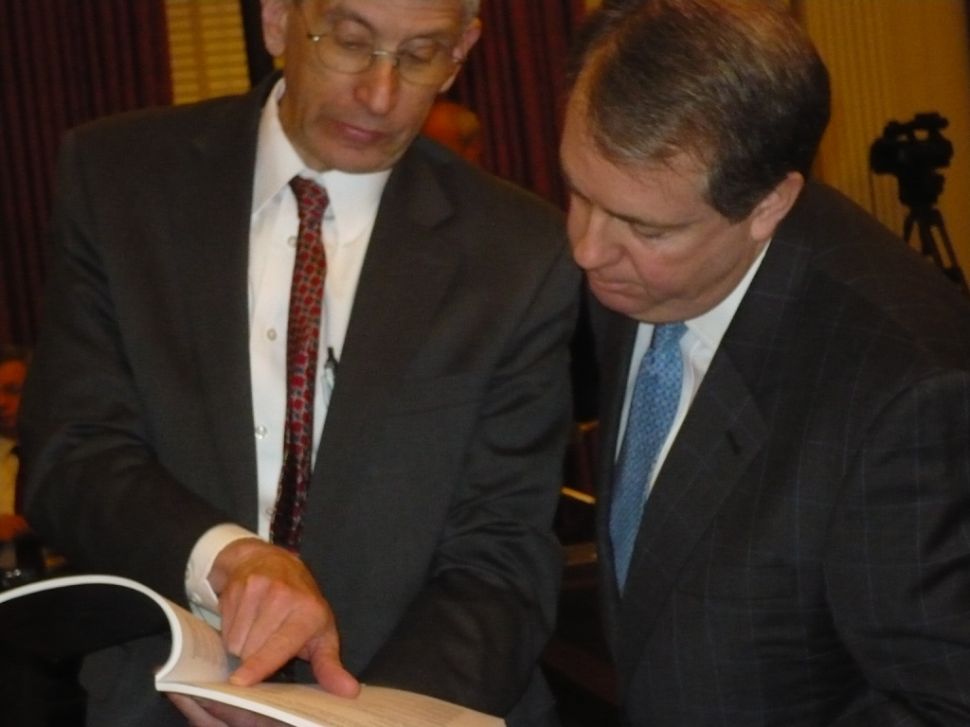