But Roque promised to make Menendez sorry for getting involved in the local contest.

“I am shocked – shocked – that a respectable senator like Menendez is getting involved in local politics like this,” Roque told PolitickerNJ.com. “It’s all right. It’s all right. It shows they are so desperate that they need Menendez to bail out Vega.

“I’m relentless,” Roque added. “But I have donated a lot to Menendez in the past, and for him to address a town that is suffering the way ours is and say Vega is the answer to the town’s troubles – that is a big political mistake.

A long-shot challenger running off the line against the hobbled but still standing Hudson County Democratic Organization, Roque reminded Menendez allies that their incumbent is due up for re-election in 2012.

“I’m going to be mayor then,” said Roque, “and Menendez better hope God finds him and he confesses, because right now he’s betting on the wrong horse. Sal Vega has been dormant like a virus for the last four years.

“My specialty is pain management,” said the medical doctor, “and I am going to exterminate the Vega virus.”

“Roque’s foolish comments show that he is absolutely devastated by Senator Menendez’s endorsement of Mayor Vega,” said Vega spokesman Paul Swibinski. “By threatening to oppose Menendez in 2012, and bringing up past campaign contributions, Roque is making yet another huge political blunder. You can’t buy Senator Menendez’s support, and you can’t intimidate him either.”

Vega’s answer to Roque’s Monday announcement that Assemblywoman Caridad Rodriguez would be joining Roque’s Together we Stand team was to go nuclear – with the endorsement from Menendez.

Those two public events played out against the backdrop of a Jersey Journal story about a “fake newspaper” printing damning stories about both men. According to the Journal, Precinto 60 paints Roque as an abortionist and Vega as a drunk.

Both sides denied being behind the rag.

“I have nothing to with it but I like it,” said Roque. “Or I did, until Vega bought off the paper.”

“In this latest issue,” Swibinski said, “the publisher (or whatever the appropriate word is) writes that Roque owes him $4,000 and won’t pay! Now isn’t that interesting. What could the $4,000 possibly be for? It’s obvious to me – Roque was paying him to smear Sal. When the money didn’t come, the guy switched targets. Who knows what he will write next time? I have no idea.” 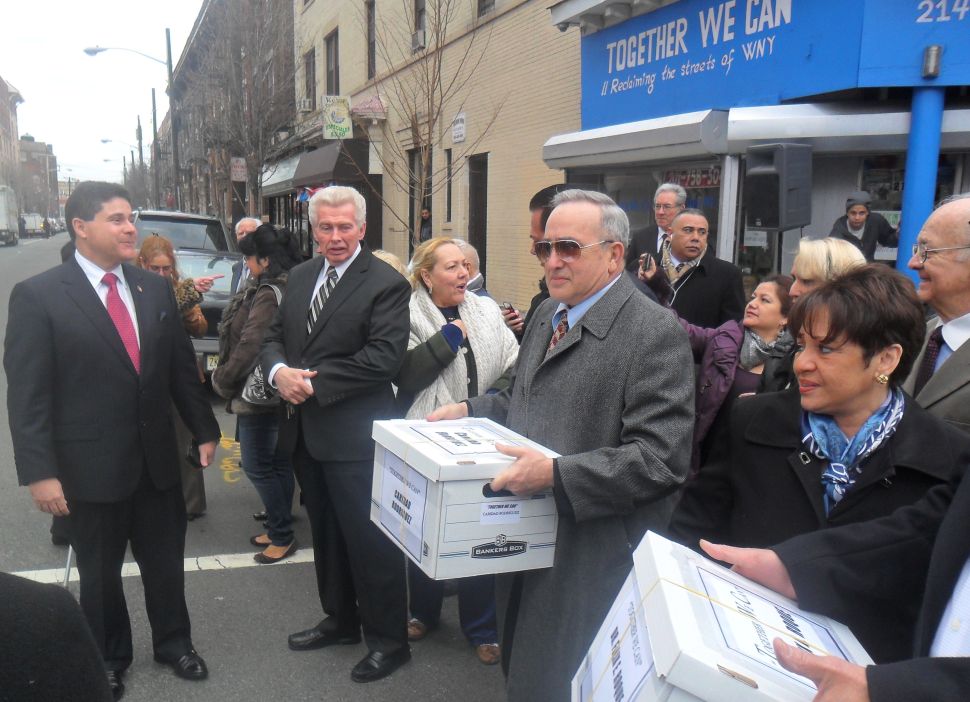