TRENTON –  Verizon and business officials Wednesday hailed the Market Choice and Competition Act, which would deregulate the landline phone and cable industry, saying the bill will help create jobs and would replace antiquated regulations that, they say, currently stifle the telecommunications industry, particularly Verizon.

“This is a jobs bill,” said Dennis Bone, president of Verizon New Jersey. “It’s about economic development and the future of New Jersey.”

In particular, Bone said the pending Senate bill, S2664, would help the state become more competitive when it comes to receiving capital improvement dollars that would help beef up its infrastructure and services, particularly FIOS, which currently serves about 2 million customers in New Jersey.

Expansion of such services will help create jobs, which ultimately stimulates the economy, Bone said.

Tom Bracken of the New Jersey Chamber of Commerce said the “Market Competition and Consumer Choice Act” is a “very easy” bill for the business group to support, describing it as “business-friendly” and “pro-growth.”

Philip Beachem, president of the Alliance 4 Action, a coalition of 2,500 business, labor and government entities, described S2664 as “the single most important piece” of economic development legislation.

Verizon estimates that for every $100 million that’s invested in telecommunications, more than 1,400 jobs are created in a variety of industries,  and  generates some $275 million in economic activity, and $13.67 million in revenues from personal and business taxes. Those figures are based on an analysis by John Dunham and Associates of New York.

Industries that would benefit include construction, engineering, and legal services, among several others.

Bone dismissed the perception that the bill is a “Verizon bill,” but clearly it would help lift some onerous mandates that other telecommunications companies are not subject to, he said.

For example, Bone said if Verizon wants to do something seemingly straightforward, such as change its customer service office location, it has to go before the Board of Public Utilities. Receiving approval from BPU could take as long as 45 days. Most of the other telecommunications companies aren’t subject to such requirements, he said.

He said it is “despicable” that various groups who are opposed to the bill are telling senior citizens that if the bill becomes law, they would be stripped from the landline service.

He added the bill would preserve “Lifeline” and “Linkup” phone services that many low-income households depend on.

A Verizon bulletin page mentioned that one in four households in the county have cut off their landline phone service.

“If communication service providers are required to respond to antiquated regulatory requirements, as opposed to free market forces, they will be restricting their ability to effectively meet customer demand and both customers and the providers will suffer,” the bulletin stated.

Bone dismissed rumors that the company intends to sell its landline assets, saying it already invested $3 billion in the state for various services.

“If you are investing so heavily…Why would you sell that,” he said.

They also argued that the bill would help expand broadband services, especially in rural areas.

An Assembly version, A3766, cleared that chamber last month. 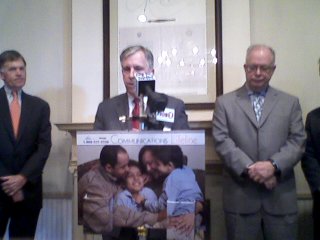