The Senate gave final passage to S2295 Monday, an under-the-radar bill that takes a bite out of strict disclosure regulations set up for the waste management industry in the 1980s.

The stringent disclosure requirements for waste management were created almost three decades ago, at a time when the influence of organized crime was becoming well-publicized in the industry. Whether or not that influence still exists is up in the air, according to critics of the bill.

“The (waste management transparency) program was done years ago to provide for exhaustive disclosure,” said state Sen. Bob Smith, (D-17), of Piscataway. “At the time there were strong allegations and some proof of mob influence in New Jersey.”

Smith abstained in opposition of the bill Monday, even though district-mate Assemblyman Upendra Chivukula, (D-17), of Franklin Township, sponsored the lower chamber version, and fellow Democrat Lesniak was pressing its passage in the upper chamber – even if Lesniak was absent Tuesday, recovering from double knee surgery.

“It decreases transparency in an industry that has historically been associated with organized crime by rolling back stringent disclosure requirements,” Buono said in a text message Tuesday. Greenstein said her questions weren’t answered sufficiently.

The bill first passed the Senate in December 2010 by a large margin, 34-0-6, but it ended up losing four votes Monday (in fairness, one vote was Lesniak’s and another was state Sen. Kevin O’Toole, (R-40), of Cedar Grove, who was absent). Still it passed, 30-3-7, with Vitale and Turner changing direction. The measure moved through the Assembly in February, 75-2-3.

“I’m not incensed by the bill’s passage, but I do think this has an element of less disclosure,” Smith said. “It’s just as a matter of principle. I’m generally in favor of more disclosure.”

“Bills like this don’t just happen for no reason,” he said. Tittel believes the reason in this case is to “help shield investors” from public scrutiny: “The public really has a right to know.”

Part of the bill actually increases industry oversight by requiring background checks for employees working on a public contract.

“I think that’s a good thing (but) it’s kind of like a diversion; that’s the part that bothers me,” Tittel said. “It should have just been a bill that increases scrutiny and leaves out the loophole part.”

Public officials could be investing in corporations that are receiving the public contracts, or professionally representing the corporations or investors, he said.

Tittel understands the exemption for publicly traded companies, which submit federal Securities and Exchange Commission disclosure reports to the state, but he is concerned with the exemptions for limited partnerships, investors, and those who hold debt in the companies.

“Sen. Lesniak was the guy 25 years ago who (was part of the effort to) clean up the waste management industry in New Jersey,” Tittel  said. “Then to come back years later and to put a loophole in, that raises concern.”

“If unsavory people get involved in the industry again,” he said, “you could end up with more Martin Luther King schools, more Encaps,” two examples of post-landfill projects gone bad.

Chivukula said if investors such as the Bill Gates Foundation, or other reputable organizations, want to invest in waste management firms, they could be scared off by the imposition of disclosure.

“They buy into the bonds,” he said. “They have no control over the day-to-day operations…This could deter them from their investments.”

Elected officials are required to present two disclosure forms annually detailing their investments, so inside jobs should not be a concern, Chivukula said. In instances where elected officials, businesses, or investors are suspected of somehow gaming the system, the Attorney General’s Office would still have oversight and access to financial records, he said, as needed.

Normally a frontline advocate for transparency, state Sen. Loretta Weinberg, (D-37), of Teaneck, voted in favor. ”I think that we can take a look at it and see if will actually help in developing business here,” she said Tuesday.

“I believe in transparency for public agencies,” she said, but those requirements are harder to impose on private corporations.

Still, if the opening allows for public officials to conceal their business with these companies, Weinberg said that wasn’t the intent and was never a point raised with her.

“I would hope that that was not a hidden part of the agenda,” she said.

Even if it’s not, Vitale said the mob’s thumb has not been removed from the industry yet, no matter what bill sponsors might say.

“The same point was made several months ago when the discussion was had about removing oversight at the Waterfront Commission,” he said, an event which was closely followed by a large mob bust tied to a prominent waterfront union, the International Longshoreman’s Association. “As if the mob was no longer involved in the waterfront, somehow.”

Like S2295, the push for Waterfront Commission dissolution was championed by Lesniak.

“They should still be stringent (in requiring disclosure for waste managers),” Vitale said. “(Criminal enterprise) never goes away. The public has a right to be protected in this case. I don’t believe for a moment that it inhibits economic growth.”

In fact, the waste management industry is doing just fine economically, critics argue, even in the downturn; so why loosen the grip on taxpayer oversight now?

“There is always going to be money in garbage,” Chivukula agrees. “Whether they are making money or not, that’s not the issue. The issue is, what is the appropriate level of disclosure? At one time there was mafia in this business. Now, if you look, all this money (invested) is coming from legitimate companies. It’s making it a little bit friendlier (for them).”

He doesn’t know whether any specific companies or organizations requested the requirements be loosened, but then again he didn’t create the bill. Lesniak was the author, although he is not available for questions at this time, his staff said. “The Senator asked me to pick up this legislation,” Chivukula said. “I do agree with him: the industry has changed. (But) there is nothing foolproof in this life.”

Another ‘no’ vote, Turner said she doesn’t have to think back that far to find proof that gamers of the system are still lurking, mafia-related or not.

In 2005, she recalled, Harry Parkin, Mercer County Executive Robert Prunetti’s chief of staff, was convicted on federal corruption charges for concealing financial interests in a recycling company that had a $14.5 million contract in Mercer County. He was busted by  then-U.S. Attorney Chris Christie and sentenced to 90 months in prison with a $26,000 fine and three years of supervised release.

“Harry Parkin was the consummate insider and double-dealer, who used his position and influence to serve himself as he professed to serve the public,” Christie said in a release at the time.

According to the U.S. Attorney’s Office, Parkin concealed a $150,000 loan to Central Jersey Waste and Recycling (CJWR) and  steered demolition contracts to the company before “attempting to obtain an ownership interest in CJWR through extortion.”

Parkin proposed a three way split of the company between himself, the owner, and Mercer County Improvement Authority Executive Director James Lambert, who later pleaded guilty to his own fraud and extortion charges. Parkin schemed to have two-thirds put in Lambert’s name to conceal his own involvement.

As part of concealing the loan, according to the feds, Parkin intentionally falsified mandatory financial disclosure forms for the year 2001 and failed to file the disclosure forms in 2002.

Turner said of Lesniak’s disclosure exemption bill – which awaits the signature of Gov. Chris Christie – “I don’t think that we want to risk any more corruption.”

“It’s a very lucrative industry with a lot of public money (at stake),” she said. “We need to know more about investors in that business.”

A spokesman for Christie declined comment on the bill. 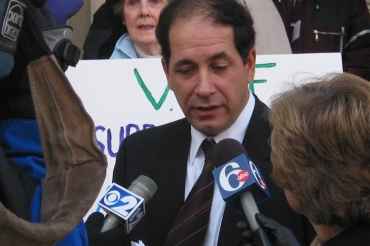