An East Rutherford councilman, Brizzi won easily, while his running mate, the relatively unknown Rottino from Woodcliff Lakes, eked out a less likely win over Jeff Bader at Wednesday night’s Bergen County Republican Committee (BCRC) convention. A businessman with no elected office experience, Rottino was lined up against most of the the GOP muscle in the county and still prevailed.

The Mayor of West New York this week landed the formal endorsement of U.S. Sen. Bob Menendez, (D-NJ), who stretched his Atlas-sized wing span around a room of Hudson County Democratic Organization (HCDO) types Thursday night in a play for a peaceable kingdom.

“She’s a former secretary,” an HCDO crum bum protested to PolitickerNJ.com when informed of Assemblywoman Caridad Rodriguez’s dramatic, 60th Street entrance into the West New York municipal race as an ally of mayoral challenger Dr. Roque. Yeah, and Hudson Executive Tom DeGise once almost lost to a Bayonne housewife. If Vega landed Menendez’s coveted endorsement this week, Roque won – at the very least – the symbolic alliance of U.S. Rep. Albio Sires’ (D-13) longtime ally Rodriguez, who also radiates Stack power. Two of the winners on this list are running for mayor of West New York, and only one can finally win. It’s – and if you keep reading this, note that there’s a potential key difference maker coming up on this very list – a race.

He has opposition, sure. And so did Mike Tyson when he fought Peter McNeeley. He promises a pavement pounding re-election campaign, but all the North Bergen mayor had to do was stand there in that labyrinth of 35 box loads of petitions and pose for pictures before setting the snooze alarm for May 11th. Sacco Spokesman Paul Swibinski on Monday urged the press to rifle through those boxes to make sure they weren’t simply stuffed with the wadded up collected works of Augustine Torres. It was too daunting an offer.

The Republican freeholder backed Anthony Rottino early and – along with the 40th Legislative District team, Freeholder John Mitchell and others – helped Rottino secure the GOP line. A clearing house between the conservative wing and Kathe Donovan wing of the Bergen GOP, although the lines are not always perfectly drawn, in the words of one operative, DiNicola emerged this week as a winner with Rottino’s win.

No, he didn’t play an extra in the French Connection, he’s just a very wired-in old school operative who runs color-coded door-to-door campaigns and – coupled with Swibinski– gives Mayor Sal Vega another weapon as the incumbent attempts to fend off persistent foil Dr. Felix Roque. The fact that he landed the job with Vega and the Hudson County Democratic Organization indicates that Jersey City Councilman Steve Fulop’s political operations janitor may be tunneling into the HCDO on behalf of his boss’s 2013 mayoral aspirations.

Dems like to knock the Gov. Chris Christie-loving mayor of Woodbridge as the Joe DiVincenzo of Middlesex County. But progressive Democrats don’t appear to have anything tangible to run against him in the primary and McCormac’s apparent Republican opponent for the general was a Republican who changed parties and became a Democrat during Jim McGreevey’s ascendency, then bounced back into the arms of the GOP with Chris Christie’s success. McCormac may have detested Jon Corzine, and he may pragmatically straddle the political landscape depending on who’s in charge, but he’s still running as a Democrat.

It’s not like this governor doesn’t know the issues or isn’t a quick study. So why make it personal? The governor couldn’t resist doing just that by suddenly singling out veteran Democratic Assemblywoman Bonnie Watson Coleman of Ewing On March 5. Christie said the murder of Eric Thomas was on Watson Coleman because she authored a bill allowing for the early prison release of certain convicted criminals. Is this a legitimate and emotional debate? Yes, but to go for the conscience jugular with Watson Coleman was way over the line.

The governor suspended without pay both North Jersey District Water Supply commissioners after his office determined that their questionnaires didn’t measure up. Manzo fought back hard, vowing to make his case for why he keeps two addresses, one at his family manse in Franklin Lakes and the other at that hotspot for rustbelt royalty: Paterson’s own The Brownstone. This is a showdown now between Manzo and the governor, and the latter yesterday – if only very slightly – indicated that if a hearings officer proves him wrong on March 21st, he’ll let Manzo out of his gubernatorial headlock. So this loss for Manzo this week – a paycheck only, which he donates to charity – may turn into a win for him next week.

The Republican County chairman of Bergen backed Jeff Bader over Anthony Rottino and endured the pain of his own kitchen cabinet abandoning him for Rottino at Wednesday night’s convention. That said, and whatever the fractures of the Republican Party in Bergen, Yudin is still in the midst of captaining a solid winning streak on his home turf.

The Middlesex County Sheriff’s Officer from South River was arrested at his home on charges of conspiracy to commit official misconduct and conspiracy to commit bribery for allegedly collecting $25,000 in bribes on behalf of former Sheriff Joe Spicuzzo from an individual seeking to be hired as a sheriff’s investigator. Spicuzzo stands charged with pocketing $50,000 in exchange for offering public jobs to new recruits. 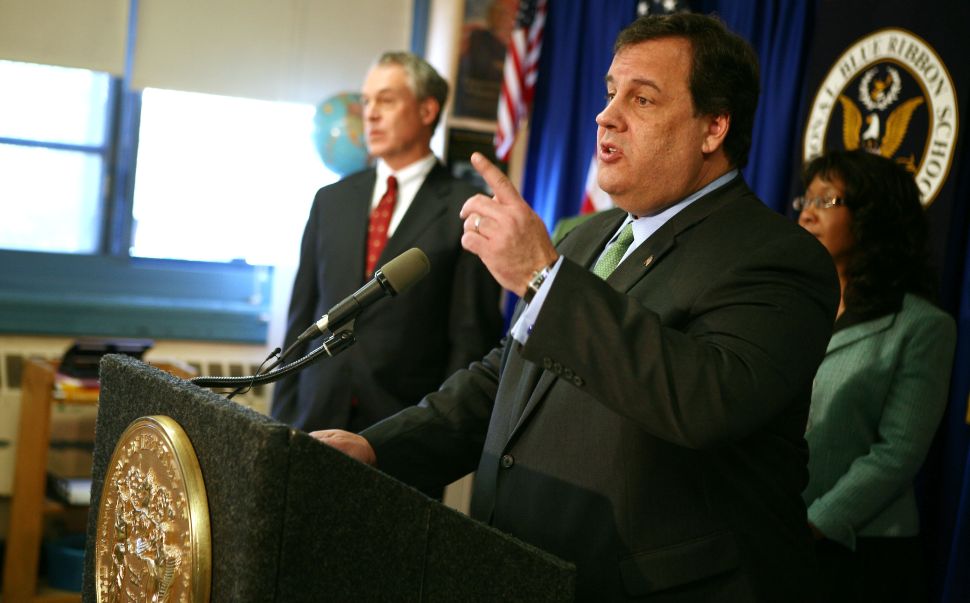