It’s still early. The contest for the Middlesex County Democratic Organization (MCDO) chairmanship is not until June. But former Edison Assemblyman Barnes folded the chairmanship candidacy of Carteret Mayor Dan Reiman into his cause this week as Reiman endorsed Barnes. Still unaccounted for is state Carpenters Union exec. Kevin McCabe, who sources say has the backing of powerful Woodbridge Mayor John McCormac, and who is eyeing a challenge to Barnes to succeed embattled ex chair Joe Spicuzzo. As evidence of fracture mounts, some sources say the ongoing – and longer term – loser here will be the organization itself, exposed as a wounded beast in the aftermath of Spicuzzo’s corruption arrest earlier this month.

The veteran assemblyman from Belleville, former Newark school teacher and lifelong political organizer, informally kicked off his re-election campaign with a fundraiser at the beginning of the week. Caputo said he doesn’t give a damn at this point where the map puts him, he’s ready to come out fighting. But a savvy pol like Caputo – a lifelong friend of Newark North Ward Democratic leader Steve Adubato, Sr. – doesn’t launch without organizational heft behind him, and whether Belleville is rerouted into the 29th District with Bloomfield in exchange for a bigger share of Newark’s south ward, or some other variation, Caputo’s announcement indicates he will have that cover.

The veteran Ocean County Republican Chairman will be honored tonight at the North Ward Center with an award from that other kingpin on the other side of the aisle, Democratic Party power broker Adubato.

There is turmoil among Democrats in Buono’s district – no banner newsflash, considering Edison – as the Democratic council continues to war with the Democratic mayor and former Mayor Jun Choi races some independent pulses with buzz that he may take on his old rival Buono. All of that could add up to trouble for Buono. But in the meantime, the Senate majority leader is getting support. She held a fundraiser last night in Spring Lake where 120 people were in attendance, including a large presence of teachers. Moreover, the potential future gubernatorial candidate was honored Wednesday evening at the Pines Manor as a “Citizen of the Year” by the Middlesex County Commission on the Status of Women, a division of the Middlesex County Board of Chosen Freeholders. Window dressing over bigger isssues here? We’ll see.

We know Gardner was once an organizer for Democracy for America so it’s no shocking revelation that DFA chair Jim Dean endorsed the labor lawyer in his Democratic Primary with state Sen. John Girgenti (D-35) of Hawthorne. But Dean’s help in ginning up financial support for Gardner will serve the candidate well as he pursues more organizational support.

You know the state’s in trouble when a guy behind bars makes the winners list (and yes, there are already too many Dems on the winners list considering the party’s in shambles). Last seen drearily exiting a courtroom in Newark, the former state senator from Paramus, bagged on charges of extortion and mail fraud, will be getting out of the can early, maybe before May. A federal judge this week lessened Coniglio’s sentence from 30 to 20 months after an appeals court threw out the mail fraud charge.

The Bayshore Tea Party Group gave its support to the Spring Lake Councilman, who tomorrow will wage for the support of the Monmouth County Republican Organization against Mayors Andrew Lucas, Bob Walsh and George Newberry, all of whom want the party’s backing for freeholder. Sources say Newberry and Lucas have looked like the favorites for the past two weeks, with each carving quiet backing from the party’s establishment. But the stately forbearance of incumbent Freeholder Lillian Burry may propel the party to look twice at a perceived renegade like Rich. He’s this year’s John Curley candidate, and with Burry battling Brookdale Community College headlines and incumbent Democrat Amy Mallet gobbling up points on that score, Rich could have a shot at tomorrow’s convention. Of course, he could very well end up on next week’s losers list, too, with three of the other candidates.

The biggest losers here are poor kids, according to the judge, which means that puts the conscience of every person in this state on the ropes. But it was the governor’s budget, and it didn’t make the grade, according to Superior Court Judge Peter Doyne, special master in the state’s school funding dispute. Doyne this week ruled that Gov Chris Christie’s fiscal 2011 budget , which slashed nearly $1 billion in school aid, failed to provide state schools the resources needed under the state’s funding formula. Doyne said the cuts enacted under Christie’s first budget failed to provide a “thorough and efficient” education for students and that the neediest students were hit hardest. Good for millionaires and the GOP base? Maybe. Good for the people who need help most? Negative.

On Monday, the state Board of Public Utilities received a formalized list of recommendations from attorney Dan Levitan for power plant projects. Absent was the LS Power project in South Jersey, for which Sweeney had carefully penned legislation, according to sources. Projects in Newark, Woodbridge and Old Bridge made Brick City, state Sen. Joe Kyrillos (R-13) and Woodbridge Mayor John McCormac victors, while Sweeney stewed with the loss.

Under pressure from Gov. Chris Christie to leave, the two North Jersey District Supply Commissioners (NJDWS) this week submitted their letters of resignation to their fellow commissioners. Christie had already suspended Cricco and Manzo without pay, arguing that Cricco was not taking sick leave from his job at the Schools Development Authority when he left his job there to fulfill his meetings obligation with the NJDWSC and that Manzo didn’t properly complete his residency questionnaire. Manzo vowed to fight the governor, then backed down and resigned. Christie went to Nutley, home of NJDWSC Chair Carmen Orechio, to do a victory lap later in the week.

This is a late  – but critical – entry to the list and a good call by Policola, whose comment you will find below. It’s true. Verizon New Jersey President Bone this week wanted the Senate (and subsequently the governor, of course) to move on bill 2664, which would deregulate large portions of the telecommunications industry. “With the on-going support of a large coalition of labor, business and consumer organizations, we will continue working with legislators and others on a measure that will bring innovation, progress, and economic opportunity to New Jersey,” Bone said in a statement, but ate the loss, in the meantime.

All I want to do is serve. Such is the mantra of many a Hudson County resident who threw on a suit and tie and walked to City Hall with the vision of Jimmy Stewart fluttering in the breeze. But it takes more than idealism to get North Bergen Mayor Nick Sacco roused for a real fight. This week, town attorney Herbert Klitzner doubled down on his ruling that mayoral challenger Kreutzer is ineligible to run for office because he was not a registered voter when he filed his candidate petitions at town hall. Kreutzer’s fighting the ruling, but win or lose that battle, how many voter hands is he going to shake in a courtroom?

The lawyer hired by then U.S. Attorney Chris Christie to monitor UMDNJ as part of a deferred prosecution agreement is on the wrong end of a lawsuit filed by a former client. The lawsuit by former Qwest CEO Joseph Nacchio alleges that among other things, Stern’s attorneys overbilled him while representing him during a six-week-long trial on insider trading charges.  Nacchio was convicted and sentenced to 70 months in prison.  His fines and restitution amounted to $70 million.

No, it’s not over, and maybe Dr. Alan Rosenthal in bifocals mode will see fit to put Nutley in a district that happens to be advantageous to the former Assembly Majority leader. But DiGaetano standing in the back of the room Thursday while Anna Little, Kevin O’Toole and Joe DiVincenzo provided the beatific Norman Rockwell backdrop to Gov. Chris Christie’s town hall wasn’t exactly the visual you want with two and a half weeks until the filing deadline. Christie didn’t need to bear hug Paulie D., but a chair onstage would have been just fine. All the backdoor chatter, however, suggests Thursday in Nutley wasn’t just accidental theater. This could change, everything’s still volatile, but that’s the way it looks right now. 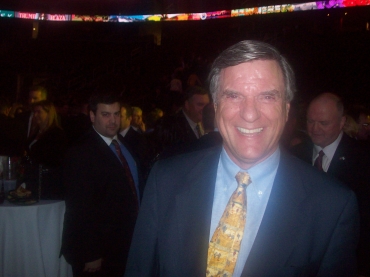