The former mayor of Lyndhurst received unanimous backing this week, succeeding Mike Kasparian as chairman of the Bergen Democratic Party. Of course, it’s not a throne up there in a bubble, where Stellato will be able to enjoy the powers of leadership like an Egyptian monarch. Taking over the helm in Bergen is more like being a Roman centurion who has to make sure the northern tribal country lives in peace, or the skipper of the Morro Castle. Stellato said he wants to change the name of the Bergen County Democratic Organization to the Bergen County Democratic Committee, “because that’s what we are, we’re a committee and I’m just the chairman of a committee.” It hardly sounds like the kind of organizational reform someone like state Sen. Loretta Weinberg (D-Teaneck) would want, but maybe it’s a start. Yeah, yeah, maybe it’s not.

Still taking that Edison sandwich purchase to the bank, President Barack Obama’s favorability rating among New Jersey voters is at 57%, according to this week’s Rutgers-Eagleton poll. Thirty-six percent disapprove. Pollster David Redlawsk said those numbers are consistently better than Gov. Chris Christie’s, who splits voters 46%-44%, according to Rutgers-Eagleton. So much for Christie’s boast that he’d beat Obama in a presidential face-off. Then again, Christie could always brag later that he lost his home state because voters are too in love with him as governor to see him leave.

The East Rutherford councilman was the runaway winner at the GOP’s Northeastern Republican Organization (NERO) convention last Saturday. Brizzi stomped on the rest of the field as he pursues the GOP nomination for one of two seats on the Bergen County Freeholder Board.

The 36th District state senator has a way of rerouting potential political challengers and reanimating them where they won’t get any ideas about standing in his way. Take what happened with former Lyndhurst Mayor Lou Stellato just this week. A year ago, the buzz was that Stellato was sharpening his horns for a run at Sarlo. Now Sarlo’s political antagonist Mike Kasparian is gone, and Stellato is in as the new chairman. If both men were happy on Tuesday night when Stellato became the new party chair, Sarlo was overjoyed.

Yes, Cumberland County is part of New Jersey, stop that. The Cumberland Gap is something else, just a few steps farther into the American wilderness. But Freeholder Lou Magazzu from little Ol’ Cumberland County has been elected Chairman of the National Democratic County Officials (NDCO). The next question, of course, is what’s the NDCO? We don’t know either, but it looks good on paper.

The Mr. Magoo of New Jersey politics was actually an old-school operator willing to walk over that fearsome line, at least according to the state Attorney General’s Office, who arrested the Middlesex County Democratic Committee chairman and former sheriff on charges that he pocketed $50,000 in exchange for giving jobs to sheriff’s office recruits. To read the charges and contrast them with the “cuddly” – former Gov. Jon Corzine’s words – Spicuzzo “is a stretch – a big stretch,” acknowledged one Democrat close to the chairman who resigned the same day he surrendered to authorities in Hamilton. If you’re having trouble picturing it, take a look at the late Phil Hartman’s Ronald Reagan sketch where he plays the Prez as a kindly old man in front of the cameras, and then reverts to hard-boiled, wheeler-dealer tough guy behind the scenes. One last thing. It would be tempting to throw Middlesex County Democrats on this list as losers. The splattered, ambition-riddled organization makes Bergen look like a monk’s retreat, by comparison. But Spicuzzo’s demise was anticipated for months and hard-core maneuvering was already ongoing for his successor. It’s possible that the whole committee will finally submerge and drag everyone down with it. But we’ve been here before and Dems manage to shake off the Joe Vas’s and Joe Spicuzzo’s of the world without getting their hair mussed.

You could already picture him in judge’s robes, couldn’t you? He has the look. The intellect. And you could picture that courtroom, too; the reporters who would show up there just to gobble up some throwaway quote by the always quotable Irish-American. But it wasn’t to be. Gov. Chris Christie nominated the conservative Republican assemblyman from Morris Twp. for a judgeship and then a week later pulled out of it.

This one snuck in late last Friday afternoon after Winners and Losers already went to print, er…Anyway, the former campaign treasurer for U.S. Rep. Frank LoBiondo pleaded guilty to embezzling more than $450,000. The Egg Harbor Township man pleaded to one count of wire fraud and one count of embezzling and converting funds contributed to a federal candidate.

Queue laugh track. It’s a good thing they’re looking out for the people’s interests in Trenton. OK. Hit that volume. Full blast. Spending by lobbyists hit a record high in 2010, cresting $65 million, even as spending nationwide fell, according to the state Election Law Enforcement Commission (ELEC). The $65.5 million spending represents a 13.9 percent increase over 2009 levels and was the largest year to year jump since 2006.

The husband of state Sen. M. Teresa Ruiz, (D-29), of Newark was stripped of his public jobs as part of a pretrial intervention agreement. Charged with submitting fraudulent absentee ballots in 2007 on behalf of his wife’s ccampaign, Gonzalez gave up his freeholder seat and his job as Newark Councilman Anibal Ramos’s city hall fixer. 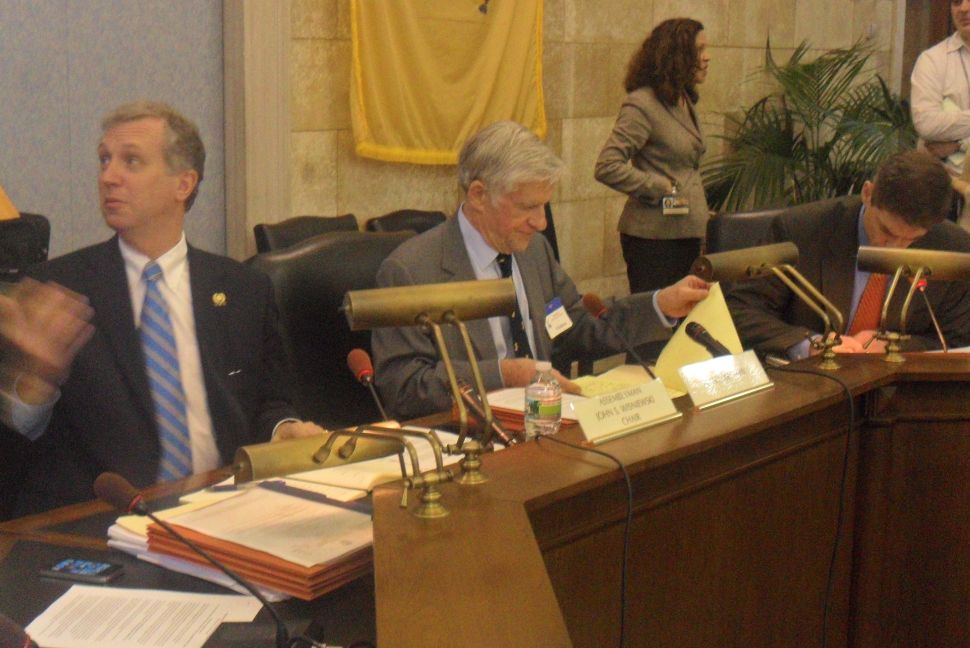