A tall, familiar looking man in his forties with silver hair and a long dark-colored overcoat was seen in Woodbridge on Monday night collecting re-election petitions and yes, it was Assemblyman John Wisniewski, (D-19), of Sayreville, Democratic chairman of the redistricting commission.

Unless it’s a Machiavellian ruse or simply force of habit, Wisniewski’s hunting and gathering efforts suggest that he’s banking on Sayreville staying in a district that also includes the mammoth Woodbridge.

“That’s my district,” Wisniewski said. “I represent the 19th District, which includes Wood, and I don’t have expectations that that will change.”

The statement, coupled with Wisniewski’s presence on the redistricting commission, mean it’s probably safe to conclude Sayreville and Woodbridge will stay in the same district after the end of this grueling, once in a decade process. The state Division of Elections says that any petitions collected beyond the borders of the newly reapportioned frontiers will have to be scrapped.

April 3 is the reapportionment deadline and April 11 is the primary filing deadline, giving candidates just eight days to go back and bulk up with any petitions they might have lost as a consequence of line shifts. It’s difficult to picture the co-chair of the redistricting commission – no less the state chairman of the Democratic Committee – scrambling over the course of those eight days to summon petitions invalidated because of boundary changes.

PolitickerNJ.com asked Wisniewski if anything’s hardened yet on the map that he and other redistricting members presumably are hammering before next Sunday’s deadline.

“My arteries,” he deadpanned.

“It’s like any negotiation,” Wisniewski added. “Having a blow by blow is not conducive to an effective resolution. The process is fluid.

“I’m looking forward to the sun rising on April 4.”

Wisniewski currently serves in the 19th District with state Sen. Joe Vitale and Assemblyman Craig Coughlin, both of Woodbridge. 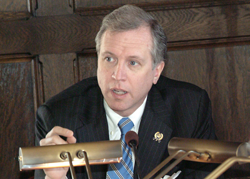