Twice in as many days, Gov. Chris Christie suggested that Al Manzo listed his Paterson and not his Franklin Lakes address to avoid the scrutiny – and potential invocation of senatorial courtesy – of state Sen. Gerry Cardinale (R-39) of Demarest and state Sen. Kevin O’Toole (R-40) of Cedar Grove.

“It never came across my desk and I don’t know him, so I can’t tell you,” Cardinale told PolitickerNJ.com today when asked if he would have blocked Manzo’s appointment to the North Jersey District  Supply Commission.

Manzo owns the Brownstone in Paterson, a sprawling old school banquet hall at the top of the hill, just this side of the border before North Haledon.

“I’ve been to half a dozen events there in the last ten years,” Cardinale said. “It’s entirely possible if it came across my desk I might have found something to not sign off on. I will tell you this, though. I signed off on a lot of Corzine appointments. The governor was elected by the people and is entitled to his appointees, that is unless an individual is not qualified.”

Presented with Middlesex County Democratic Committee Chairman Joe Spicuzzo as a candidate for the Sports and Exposition Authority, Cardinale hit the reject button.

“He was incompetent,” Cardinale said. “He couldn’t string two sentences together. When he was asked where the Sports and Expo Authority was he didn’t know. He thought it was in Middlesex County.”

Both Cardinale and GOP Chairman Bob Yudin railed against Democrats for blocking Christie’s nominees to boards, commissions and authorities, including an appointment to the Sports and Expo Authority of Yudin.

“My nomination has been held up for a year,” said Yudin. “It’s outrageous. The Democrats are not honoring a gentleman’s agreement. They don’t get that Christie won an election. They are holding up more than 100 appointments. They are just laying the groundwork for total gridlock and threatening the foundation of our system.”

“I’m displeased with the Democrats’ concerted effort to deprive Governor Christie of his team,” said Cardinale. 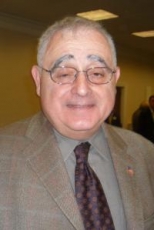