Some 40 people attended a rally outside of the Statehouse Wednesday that was organized by the N.J. Sierra Club, demanding Gov. Chris Christie to maintain, if not strengthen, the state’s energy Master Plan.

Flanked by clean energy proponents, who held up such signs as “Save Our Solar Jobs” and “The Answer Is Blowing in the Wind,” and others wearing bright yellow shirts reading “Beyond Coal,” Sierra Club director Jeff Tittel said, it’s important the master plan “continues to be a progressive document.”

“The choice is very clear,” Tittel said. “We need to make sure there is enough solar and wind energy in New Jersey.”

To get their point across, the clean energy supporters, which included electricians, installers, and clean-energy company owners, had 1,600 letters and 400 petition signatures to deliver to Christie’s office.

A person with the governor’s constituent relations office collected the materials.

Lyle Rollings, president of the Mid-Atlantic Solar Energy Industries Association, said hundreds of solar energy companies have been created in the past eight years, but added that the cost of solar energy in New Jersey is still too expensive.

“We need to reduce our oil consumption and create jobs,” said R.oger Locandro, a contractor with Energy Smarts Mechanical LLC., which specializes in home energy conservation.

He said a person who recently converted from oil heat to gas, with the installation of high efficiency boilers, insulation and air seals, saw their energy bills fall from $750 a month to about $100.  The conversion cost approximately $20,000.

With oil prices sky-high, now is the time to wean off of it, he said.

“If we reduce our demand (for oil), the more the commodity will drop.”

The rally was held in advance of the New Jersey Board of Public’s expected release of a revised Energy Master Plan (EMP), which would set priorities  for New Jersey’s energy conservation and efficiency efforts. 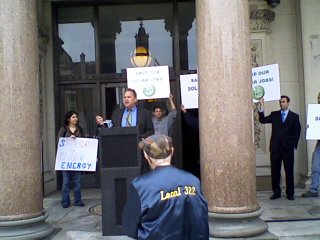