FINDERNE – When Prof Alan Rosenthal affirmed the Democratic Party map he simultaneously unleashed three mountain men on the sedate suburban landscape of Bridgewater Twp., and tonight at the GOP convention, Warren and Hunterdon County stormed eastward into the midst of the same organization that once delicately unveiled Gov. Christie Todd Whitman.

Leading his fellow District 23 redistrictees, movement conservative icon state Sen. Mike Doherty (R-Washington Twp.) crossed the county line and stepped into a power handshake with Assemblyman Jon Bramnick (R-Westfield), here with the 21st District team who catch Somerset in a pincer movement coming from the other side.

“It’s like the aftermath of Stalingrad,” cracked Doherty, who just picked up Bridgewater, ground zero for GOP Central Jersey operations – a reference to meeting Bramnick on the other side of the redistricting tumult.

“We have a way of doing things here, a strong organization,” fretted an insider as Doherty – known for seldom falling happily into any organizational embrace – worked the room.

The men waited solemnly while an emotional Assemblywoman Denise Coyle (R-16) – left for political roadkill on the D map – evoked the memory of the Battle of Trenton in summoning more than one applause line in explaining how her move back into the 16th District would enable her to remain on the line with running mates state Sen. Kip Bateman and Assemblyman Pete Biondi.

“That map, that map,” muttered Biondi.

Coyle was making the most of it at the head of a packed room that included north Morris County monument turned Somerset County newcomer state Sen. Tony Bucco (R-Boonton) who had at least enough name ID down here to flatten challenger Morris County Freeholder William Chegwidden to land the Somerset line.

“I drive out of Trenton and think to myself, ‘they were camped right there,'” said Coyle, invoking General Washington and the Continental Army. The asemblywoman tearfully quoted Washington quoting Alexander Pope, who wrote, “Do well thy task, herein is the honor,” adding that she strived for the same.

An appreciative crowd gave her a standing O for staring down the map.

Then – with the District 21 Team bearing down on the event – it was Doherty’s turn.

“They want us shooting at one another but there’s only one enemy out there and that’s the Democratic Party,” said Doherty. 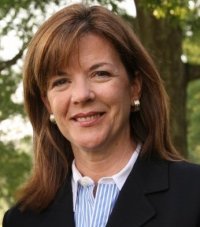