TRENTON – Coming out of the gate, state Sen. Gerry Cardinale, (R-39), of Demarest, is calm and composed as his Republican challenger is trying to pass on the outside – at the first turn.

His primary opponent, oil company owner Michael Cino, is challenging Cardinale’s candidate petitions on several grounds – some of which put a grin on Cardinale’s face – such as the fact that he “may actually be a resident of the Caribbean Island of St. Maarten,” according to a statement released by  Cino Monday.

Another of Cino’s claims is that Cardinale isn’t who he says he is; rather, he’s Salvatore or Sergio or S. Cardinale.

Cino, also a Demarest resident, challenged Cardinale’s petitions on seven grounds, according to his release, “ranging from substantial to the technical,” but he actually missed the challenge deadline last week – which he blamed on his celebration of Emancipation Day last Friday.

Cino refers to unspecified records from the ‘70s and ‘60s indicating that Cardinale’s first name “actually begins with the letter ‘S.’ ”

“The campaign is unsure whether Cardinale’s actual first name is Salvatore, Sergio or some other first name beginning with the letter ‘S,’” Cino said.

There is cause for the confusion, which the veteran legislator explains easily.

“It was a family thing, some old-line Italian family thing,” Cardinale said. “The first son of the father had to be named, according to this tradition, after the father’s father.”

In Cardinale’s case that was Salvatore Cardinale, his paternal grandfather.

“My mother actually rebelled and she named me Gerald. I was Gerald until I got to high school when I needed my baptismal certificate,” he said. “Lo and behold, we found that my godfather (my father’s brother who filled out the birth certificate) had named me Salvatore Gerald.”

To this day, he has S. Cardinale on his driver’s license and on his personal financial records, but his voter registration lists Gerald Cardinale.

Cino charges in his letter to the Department of State, “Internet searches indicate that there are seven people with the name ‘Gerald Cardinale’ or ‘Gerry Cardinale’ and none of them live at 306 Hardenburgh Avenue, Demarest, N.J.…Therefore, the petition should be disqualified for failure to use proper legal name as required.”

First initials can be used on the ballot, Cardinale holds, or an alternate spelling of a name or a middle name.

Cino claims that two of three signatures from Cardinale on the filings match, while a third on the “Disclosure Statement of Criminal Conviction” does not.

Cino also claimed three clerical errors were submitted on the petitions, which likely will not disqualify Cardinale for the election if they can be cured beforehand. Cardinale said he doesn’t think this will be an issue.

The challenger calls on Cardinale to submit proof that he lives in Demarest, “because it is known that Cardinale spends much of his time on the Island of St. Maarten in the Caribbean when he is supposed to be representing the people of his district in Trenton.”

Cino asked for documents, including plane tickets and off-shore bank accounts, as proof.

Chuckling at the assertion, Cardinale said he spent two weeks on the Caribbean island in 2010; one week in the spring and one in the fall.

Cino’s excuse for the late filing was also interesting.

“Friday was a holiday, Emancipation Day, and the IRS was closed and the federal government observed this important day and the Michael J. Cino Senate Campaign sees no reason why it should have to disrespect the African-American people by being forced to not observe Emancipation Day, which celebrates the freeing of the slaves by a great Republican, Abraham Lincoln,” he stated in the opening of his letter. “So in respect to all African-Americans who still feel the sting of the thoughts that their ancestors were enslaved, even in a nation which claimed to have all people free, please accept this letter as confirmation of our challenge to the petition of ‘Gerald Cardinale’ for the state Senate 39th Legislative District on the following grounds.”

He also slung some of his own accusations across the way.

“Someone should take a look at his petition,” Cardinale said, alleging that it is riddled with signatures from residents outside the district.

“Not towns that changed (in redistricting),” he said. “They were towns that were in the district before:” Bergenfield, Tenafly, Edgewater.

Cardinale also said Cino has signatures form voters registered as Democrats, not Republicans as is required for the primary. He also has non-registered voters in his filings, Cardinale said.

Not available for response, Cino is a former Democrat who changed his party affiliation prior to a primary challenge of right-wing U.S. Rep. Scott Garrett – although Cardinale claims Cino never even voted for himself in the contest.

According to a source, Cino’s challenge was dismissed by a court this afternoon, while Cardinale – who filed his own challenge of Cino’s petitions – was upheld, leaving Cino off the ballot for the primary. 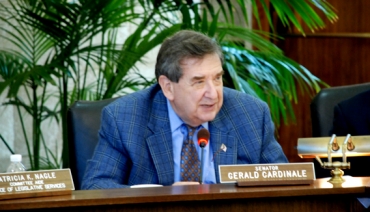