The short-time former Democrat who lost to state Sen. Phil Haines 61-39% in 2007 calls Olympian Carl Lewis a long shot at best to win this year in LD 8.

“I had good name recognition in government and politics and the community, all in all I had a very strong background,” said retired Assemblyman Francis Bodine of Moorsetown (pictured). “I came up through the ranks. I was a councilman, mayor and freeholder before I went to the Assembly. Carl doesn’t have anything that can compare to the name recognition that i had, and I think that will hurt him.”

It was one of those surreal New Jersey moments when longtime GOP standard-bearer Bodine announced he would be changing parties to run for the vacant Senate seat four years ago.

“When I did what I did, I was dropped by the Republican Party after 30 years,” the former assemblyman told PolitickerNJ.com today in a telephone interview. “I felt ‘you’re not going to throw me out of here. If I’m going, I’m going to go out on my own terms.’ I was doing some early polling and it looked good. But, of course, it did not work out. That was end of my career.

“As for Carl, he’s somewhat of an unknown to the 8th District population,” Bodine added. “His sports career goes back to 20 years ago. I had no idea it was coming. It’s kind of an off-the-wall type of thing. I don’t know what his background is with regard to politics. Anyway, if people aren’t sports enthusiasts, they probably haven’t heard of him.”

First of all, he is a Republican again.

“I  switched back after the race,” he said. “I also don’t vote in the 8th District. I switched my primary residence to our home in Long Beach Island. I will not be voting for Dawn Addiego or Carl Lewis. I will be voting for (state Sen.) Chris Connors in the 9th District.”

Finally soundly beaten by Haines (who left office last year to take a judgeship), Bodine said he left politics with no regrets.

“The agreement I had with the Democratic Party was that if I was going to be successful, I would always be conservative, and their response was they didn’t care. They wanted me to vote how I always voted. They would do all the raising of money and I would have to go to the functions and the fundraisers, the door to door. For them, raising money was never a problem. They were very good. Very organized. They were far more better prepared than the Republican organization. It was very detailed, with regular progress reports, a very disciplined machine. I learned a lot observing how they worked.”

The campaign turned ugly over the summer and by September, Bodine was nose-diving in the polls.

“Yes, the polls showed Haines pulling ahead, and so what the Democrats did was they took the money they had raised for my television and advertising, and they put it behind (state Sen. Jim) Whelan of Atlantic City. Atlantic City is more of a plum than Burlington County. After the campaign, I ran into Whelan and he said, ‘I want to thank you.’ I said, ‘For what?’  He said, ‘For sticking it out. If you hadn’t, there would have been a lot of money shifted down here by the Republicans.’ So I helped him by sticking in there.”

Bodine admitted that the redistricting removal of Moorestown and Mount Laurel helps Democrats in the 8th – but not much.

“Carl Lewis would be a long shot – on the other hand, I don’t know that much about what Dawn Addiego has done for the 8th Legislative District. The winner here is (state Sen.) Diane Allen (in the 7th). It doesn’t surprise me that Diane Allen wanted to get rid of Pennsauken and pick up Moorsetown. She is a native of Moorsetown. My belief is the 7th District can go Republican with Mount Laurel and Moorsetown coming in and Pennsauken coming out.

“So the situation helps Carl in the 8th, but I don’t know where there’s enough strength in the 8th for him,” Bodine added. “The only thing I can say, again, is I can’t comment on Dawn Addiego. I can’t comment on her standing in the 8th Legislative District. Friends of mine ask me about her, see. In my opinion, if I had to compare Carl’s chances to mine, in my opinion, I had a better chance than he has. Given the style of campaign the Democrats run, he’s going to have to exercise a lot of discipline. If you’re not accustomed to hard campaigning, that could be a challenge.”

Happy in retirement, Bodine said the morning after the election he went to visit his daughter in New Hampshire.

“And I never looked back,” he said. 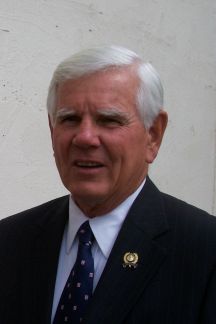