EDISON – As a boiling pot began to simmer last night with the party-line candidacy of state Democratic Party chairman and Assemblyman John Wisniewski (D-19), of Sayreville, in hand, the Middlesex Democratic Party turned their attention to the next broiling dish: replacing their party chair.

It was the first meeting since the cuffing of chairman and Middlesex County Sheriff Joe Spicuzzo, who stepped down in March to face corruption charges.

Only five years prior, it was John Lynch of New Breunwick, former state senate president from Middlesex, doing the perp walk. Three years ago, it was Assemblyman Joe Vas of Perth Amboy.

Few of the men and women at the Pines Manor last night could even tolerate hearing the name “Spicuzzo,” which carries this new legacy of alleged corruption.

It seems in direct correlation to this emergent rap, one corner of the party is sending a lifelong law enforcement and government battle ax, Peter Barnes II, to the fore for a swan song at 82 years old.

His opponent, former Labor and Workforce Development Commissioner Kevin McCabe, is almost half a century removed from Barnes – which makes the age factor noticeable even though both sides deny it will play any role in the contest.

They are heading toward a mid-June machine vote to decide which will take control of the party – a proxy fight that pits Sayreville-Piscataway-Edison contingent versus the Woodbridge-based McCabe support group of Mayor John McCormac and state Sen. Joe Vitale (D-19) – and Majority Leader Barbara Buono (D-18), of Metuchen.

Metuchen is buried inside of sprawling Edison, where the actual battle for the chairmanship will likely play out, right in Barnes’s backyard, in the fractured heart of the fractured county.

McCabe’s people think he can take up to 40 percent of the committee votes there – but detractors wonder if even that will be enough to overcome the indomitable reputation of the proven vet, Barnes.

Middlesex County is the second highest county in population behind Bergen County, and is the hourglass crossroads of the state, where every grain in the slow trickle of New Jersey sand passes through.

It was this crossroads power that Lynch wielded so well, said one Middlesex insider, exacting a toll from everyone and everything that passed through the county’s unavoidable borders.

“Now they’ve built a bridge right over us,” the source said of the political powers that be. “No one is paying the toll.”

Buono, one of the leaders of a very fractured Middlesex Democratic Party, hopes to change the storyline.

“I think that we’re on the mend,” she said, following a week prior where she backed an uprising against Wisniewski and the party boss-controlled Democratic redistricting team for a leaked map that vied Buono against Vitale, among other instances of interparty cannibalism.

Last night, the Woodbridge committee people – a sizable portion of the room – abstained from voting on Wisniewski’s party-line candidacy, a public slap in the face to the state chairman and top-level Middlesex representative.

Was it the end of the cross-county beef?

“I’d like to think so,” Buono said, hardly convincing.

Vitale was clearer: “There’s going to be a fight over the chair.”

McCabe is running a “door-to-door, grassroots” campaign against Barnes, he said, as if this were a general election.

“Support has been better than expected,” Vitale said, including in Edison.

McCabe, working the room last night, said, “My goal is to help reestablish the party to where it once was.”

His buzz words were “energy” and “vision,” although McCabe said that’s not a jab at the elder statesman Barnes. True, McCabe may be spryer and better sighted – no one has checked this – but he’s not taking age into account.

“The determining factor is who will have the plan and the vision to help bring the party back to the level it once was,” McCabe said, “not only short-term victory, but for several Novembers to come.”

Barnes was also shaking hands and making nice in Edison last night. He said restoring integrity to the party “that’s one of the things (we’re focused on), but we’re primarily interested in winning elections.”

When the conversation moved to the post-Spicuzzo realities, Barnes went quiet: “I’m not going to discuss that.”

He laughs off the interparty feud showing his age with a Will Rogers quote: ” ‘I don’t belong to any organized party. I’m a Democrat.’ It’s true to an extent.”

Smith is confident that Barnes will prevail and was touting endorsements that he believes calls the match for the former FBI special agent.

“Peter Barnes is going to be a fantastic chairman,” Smith said. “I think he would provide a very calm and guiding hand and lead us to victory in the future.”

McCabe countered the endorsement game. “The only endorsement I’m seeking is that of the county committee members of Middlesex County,” he told PolitickerNJ.

Smith and McCormac are in a bit of an arm-wrestling match over this post, and the Woodbridge mayor last night promised McCabe will “work hard” on the outreach and expects him to prevail.

Either way, the Middlesex Dems will be glad to move on from the Spicuzzo era – and maybe start collecting their tolls again. 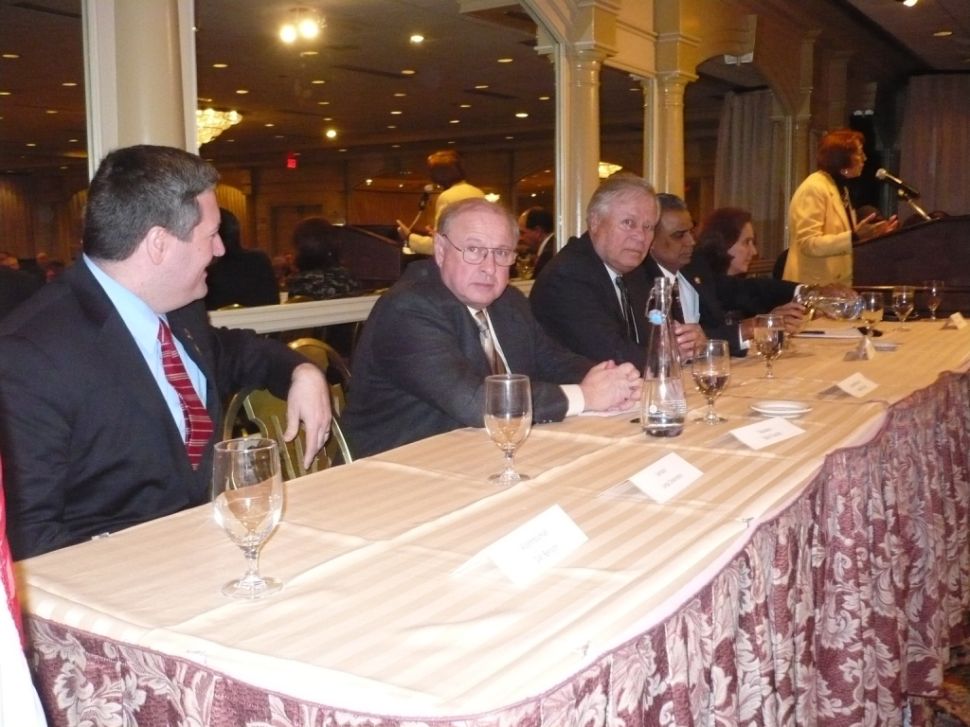