CAMDEN – Declaring that respect for the state constitution is of “paramount concern,” U.S. District Court Judge Noel Hillman today did not issue an injunction against the decision rendered earlier this week by Secretary of State Kim Guadagno to jettison Carl Lewis from the 8th Legislative District ballot.

Praising the former Olympian’s feats, the judge noted, however, that “Whatever a candidate’s personal qualities may be, they have to have four years of boots on the ground,” said the judge.

“I am compelled to believe the plaintiff is unlikely to prevail (on a state appeal) that this violates his protection under the 14th Amendment,” Hillman added in reference to Guadagno’s dismissal of Lewis’s candidacy.

“I am bounded by the Supreme Court decisions,” Hillman said.

Moreover, “There is a compelling state interest in the four year residency requirement,” the judge added.

Hillman said this case does not consider a city ordinance but the sovereignty of the State of New Jersey.

“These powers and this state constitution has been part of the standing law of this state for 167 years,” said the judge. “While difficult, the voters of the State of New Jersey have long had the power to change this provision and at least twice passed… The power to change it and the failure to change it… stands for the proposition that the majority of people want a four-year (residency requirement).”

Parrying Tambussi’s argument that in the age of computers people don’t technically have to live in the districts they purport to represent, the judge said cruising the Internet isn’t the same as hanging out at the coffee shop and firehouse.

Following the judge’s decision, Tambussi immediately said he would appeal in federal court (3rd Circuit Court) – an appeal that runs concurrent to his state appeal of Guadagno’s decision.

“The problem is the printing of the ballot,” the attorney told PolitickerNJ.com, acknowledging testimony today by clerks that next Monday is the deadline and Hillman’s denial of a stay.

Hillman’s early declaration today that he would not challenge the factual issues in the case left Tambussi with the option of more broadly attacking the state’s residency restriction, which proved another wall with the judge, who was reluctant to interfere with state law.

When asked about Guadagno’s failure to note in her decision that Lewis had property in New Jersey going back to 2005, Lewis’s attorney described Guadagno as “an experienced trial attorney.”

He added that Lewis is out of state today on business. 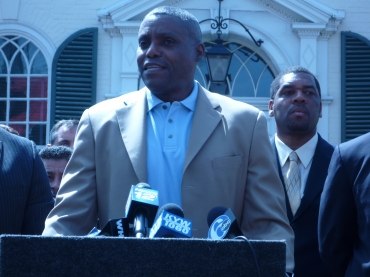