NEW BRUNSWICK – In a penultimate act a day before the final vote, tiebreaking Redistricting Commissioner Prof. Alan Rosenthal chose the Democrats’ legislative map today after a final meeting with both sides.

The decision came as little surprise to insiders who had predicted Rosenthal would side with the Democrats since he issued a memo several weeks ago outlining his parameters for fairness.

Republicans had argued that the map adopted in 2001 was unconstitutional because it gave Democrats a huge advantage, while Democrats had sought to preserve thier majority in both houses while gaining the support of minority groups seeking more representation in the legislature.

The map makes changes to nearly every district in the state, but endangers the seats of only a few representatives.

Among the potential casualties is Sen. John Girgenti (D-35) whose hometown of Hawthorne will be moved from the 35th, disconnecting it from the Democratic Party power base of Paterson.

The map also enables the Republicans to create a third Senate seat in Ocean County while pitting GOP state senators Sean Kean and Robert Singer against each other – with the Ocean-based Singer having the edge.

Contrary to mid-week reports, state senators Barbara Buono and Joe Vitale do not face each other in a primary. Former Gov. Richard Codey remains in a district similar to the current 27th. He loses Orange and Newark, gains Millburn and a Morris County piece. The new 29th includes Belleville, and the North and East ward, part of the South Ward and most of the Central Ward. The 28th includes Newark’s West Ward, part of the Central and part of the South Ward, Irvington, Nutley and Bloomfield. That means state Sen. Ronald L. Rice, the district’s sitting senator, would represent Essex County Executive Joe DiVincenzo of Nutley, his intra-party antagonist. Assemblyman Albert Coutino, Assemblywoman Grace Spencer, both of Newark, and Assemblyman Ralph Caputo of Belleville are three legislators in search of two seats.

In District 2, Republican Assemblyman Vince Polistina, who is challenging incumbent Democratic Sen. Jim Whelan, loses a little ground, a Republican source said, because the district loses Galloway and gains Buena, Buena Vista and Somers Point. Polistina’s from Galloway. But the shift also causes inconvenience in Camp Whelan. The senator is trying to put together a ticket this weekend. One of his candidates for the Assembly is from Galloway, a ticketmate that will no longer work.

In the Assembly, Democrat Reed Gusciora is out of the 15h District, while Republican Joe Malone would move from the 30th to the 7th District.  Nutley would move form the 36th District into the 28th, taking new Assemblyman Kevin Ryan with it.

Democrats now control the state Senate, 24-16 and have 47-33 control of the Assembly. The new map will likely leave Democrats in control of both houses but could give the GOP a shot at more districts than it currently controls.

A Democratic source said in the winning map former Gov. Richard Codey’s 27th District would pick up a larger portion of Morris County, but not get pitted against Republican state Sen. Joseph Pennacchio.

After deliberating for five hours with both parties’ maps, Rosenthal’s door opened and he and his team emerged. They walked quietly across the hallway to the Republicans’ room.

There was silence on the other side of the door.

“Have you rendered a decision, doctor?” PolitickerNJ.com asked Rosenthal.

He did not answer as he continued walking across the hall to the Democrats’ headquarters.

Laughter could be heard on the other side of the closed door.

As the 11th tiebreaking member of the redistricting commission, Rosenthal inspected both parties’ last submissions yesterday evening. He had said he would work with both sides, giving them opportunities to change their maps throughout the process.

But he said he intended to choose one or the other in the end.

Wisniewski made the presentation to Rosenthal, with input from the other commissioners.

Gov. Chris Christie sat in on the Republican meeting.

“I really don’t have anything to say,” the governor told PolitickerNJ.com during a break earlier this afternoon.

Under a heavy layer of tension, most of the hallway buzz throughout the day favored the Democrats to win the map, a view held by experts familiar with Rosenthal’s thinking. In an essay he wrote for PolitickerNJ.com last month when the veteran Rutgers University political science professor joined the commission as the 11th tiebreaking member, Monmouth University Political Scientist Patrick Murray defined Rosenthal’s fairness test as “incumbents facing a familiar electorate. In other words, incumbents should be drawn into districts where the majority of voters are already represented by them.”

An aggressive push by the Latino Leadership Alliance of New Jersey (LLANJ) and the New Jersey Legislative Redistricting coalition in part forced Democrats to consider the Hispanic question early – consideration that ultimately propelled Girgenti into political oblivion, even though sources say the Hawthorne-based senator intends to move to Paterson to defend his seat.

In a mid-week memo, Rosenthal told both sides he wanted one Black district and two Latino districts. Throughout the week, the two parties differed on the parameters of the 33rd District. The GOP and the LLANJ wanted it to remain as is, while the Democrats wanted to push it south into Jersey City and break West New York away from Union City.

“The 33rd acts as an engine for Latino empowerment,” a Latino source said, decrying the break.

“District 33 is the smallest, most compact district on the present map,” said Webber. “It’s the only Latino district in the state and has served as a launching pad for some of the most accomplished politicians in the state.”

But the D’s version prevailed, contrary to the will of their own party ally, state Sen. Brian P. Stack (D-33) of Union City who was on record supporting the Republican version of the 33rd. Under the Democratic map, the district goes to 47 percent Latino.  However, Democrats presented census projections that show the 33rd will again become a majority Latino district within a few years.

The matter of a second Latino opportunity district proved just as thorny to the two sides.

The Republicans wanted to fuse North Bergen and Passaic to create a Latino power district while throwing into turmoil the re-election plans of both Senator Sarlo and state Sen. Nicholas Sacco (D-32) of North Bergen.

But that proposal failed to win Rosenthal’s approval.

The Democratic map makes the 35th District a minority opportunity district.  Cutting Girgenti out of his existing turf and sending the veteran legislator sprawling into suburbia gives Hispanic Assemblywoman Nellie Pou (D-35) of North Haledon a chance to become a senator.   The 35th will be made up of 48 percent Hispanic voters.

Veterans of the process as well as current participants gave the 78-year-old Rosenthal credit for being a highly energetic and engaged 11th member – a departure from the role the 11th member played a decade ago.

“I think Prof. Rosenthal has listened to us throughout,” said Webber moments after the Republicans emerged from their map presentation meeting with the 11th member. “He has listened to arguments on both sides.” 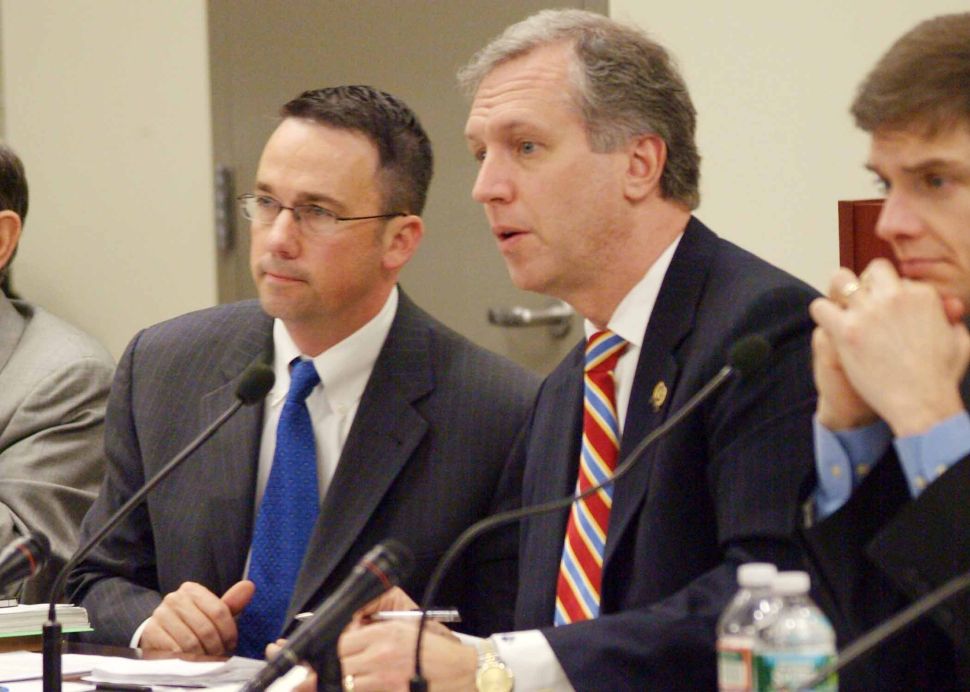