TRENTON – As the likelihood of toolkit legislation wanes, League of Municipalities Executive Director Bill Dressel is wondering how the policy can move so quickly to the political, i.e. how have money-saving methods already been reduced to campaign fodder.

“These were promises made by the governor and other legislative leaders, and promises broken,” he said Friday. “I’m getting more and more of the opinion that we’re not going to get these things resolved, particularly in regards to health reforms.”

Public employee health care and pension reforms aren’t technically toolkit bills, Dressel notes, but, according to him, since they were guaranteed as supplemental relief for a tight 2 percent levy cap already installed, “They’re inextricably part of the toolkit.”

They were first promised by the end of 2010 when the cap was passed last year, Dressel said, then pledged again when binding arbitration reform was passed late in 2010 – complete with exemptions for pensions and health care costs, supposedly to be handled under the stalling reforms now on the table.

This isn’t even taking into consideration lesser-priority reforms, like civil service and sick leave – actual toolkit bills still unacted upon.

“We’ve had conversations with both of them,” Dressel said of Sweeney and Beck, but he saw the frank discussions on tough reforms fall through in 2006 – so he’s not optimistic.

“History has repeated itself,” he said. “The die was cast on this particular scenario back in 2006. We said at the time, ‘Don’t make the cap law the centerpiece of property tax reform.’ That was low-hanging fruit. They convinced the electorate (and now they’ve) put off making the hard-nut management decisions down the road.”

He’s not sure what level of savings towns are expecting from the reforms – Sweeney’s bill is only pegged to save $20 million in year one, much less than the $323 million Christie’s proposed budget calls for from the pension and benefit overhauls.

“I get somewhat concerned,” Dressel said, wondering whether the reform savings – if they get done – will be relative to the levy cap. He worries “to what extent are they compromising, that these costs are still beyond the 2 percent cap? The bottom line, we’ve got these costs (of pensions and benefits) to deal with.”

Answered or not, the questions don’t stop there: “When are they going to take effect?”

He’s concerned that a less painful-to-the-unions, slow rollout of contribution increases will delay any local savings in the coming years.

“It’s not going to be the folks sitting under the gold dome on State Street (stuck with shortfalls). It’s going to the guys on main street,” Dressel said. 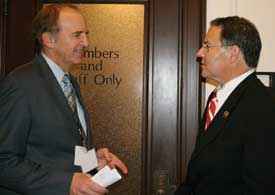