A state ethics committee Tuesday dismissed six of seven complaints filed against Assemblyman Scott Rumana, but tabled an allegation that Rumana’s actions in advocating for an energy corporation he formed presented an appearance of impropriety.

The appearance portion of the complaint filed with the Joint Legislative Committee on Ethical Standards was tabled at the request of committee members who asked for more information on which of Rumana’s actions could be construed as improper.

At issue is a complaint filed by Wayne resident Bill Brennan, who is challenging Rumana in the November election.  Brennan has alleged that Rumana violated state ethics laws when he attempted to appear before the state Board of Public Utilities to advocate on behalf of a company formed to bring an energy co-generation plant to Wayne.

For 10 years, Rumana has sought to bring the plant to the township; an effort he says will save the taxpayers $20 million over the next 20 years.  Rumana says that in order to shield the township from any liability connected to the plant, he formed Wayne Energy Corporation, a 501 (c) (4) to negotiate the terms of the deal and named himself chairman of the company.

According to the assemblyman, a private entity would own the plant and bill WEC for its services. WEC would simply pass that bill to the township for payment and pass the payment back to the energy company running the plant.  Construction and operation of the plant would be planned, contracted and paid for by the outside entity and the WEC would have no authority over hiring.

Brennan has alleged that by attempting to appear before the BPU and later by calling the Commissioner of the Department of Education to approve the installation of solar panels on a school, Brennan violated ethics laws that forbid a legislator from appearing before a state agency.

The committee dismissed those allegations as well as four others that alleged that Rumana has a personal financial interest in WEC, that the assemblyman exhibited “lack of candor” by not turning over certain documents to the committee, that the financial disclosure forms required of all legislators were incomplete because they did not list his participation in Wayne Energy Corporation and that he improperly entered into a contract with a state agency.

In all six of the dismissed complaints the committee found that there was a lack of credible evidence to pursue the complaint against Rumana, and in the case of the improper contract portion, that the grant Rumana received to bring solar energy to public buildings in Wayne did not constitute a state contract as Brennan alleged.

In the case of the complaint that Rumana derived a personal financial interest from Wayne Energy Corporation, the committee found that his involvement did not fall under the law barring a legislator from introducing or voting on legislation that would benefit the lawmaker or his or her family. As for the lack of candor portion of Brennan’s complaint, the committee ruled that enforcing candor is the job of the members and not a complaintant. Counsel to the committee said Rumana had not been asked for any supporting documents and so had not lacked candor in his response.

The committee also ruled that Rumana’s failure to include WEC on his financial disclosure forms amounted to a “de minimis” oversight.

After debating for nearly an hour over whether any of his actions constituted an appearance of impropriety, the committee asked its counsel to draft a memo explaining which portions of Brennan’s complaint might fall under that portion of the ethics laws.

It’s unclear how that portion of Brennan’s complaint will play out but at least two members of the committee, including Chairman Alan Rosenthal, said they are uncomfortable with judging the appearance of Rumana’s actions.

“It’s unfair to legislators who want to know what can I do, what can I not do,” Rosenthal told the members of the committee.  “People have different opinions about what is ethical and what is unethical.  It’s putting legislators at terrible risk by using this standard.”

The complaint has dragged on for months as the committee has debated Rumana’s involvement in the energy corporation and Brennan has several times introduced new evidence.

After the hearing Rumana said he was grateful the committee took action on most of the issues. 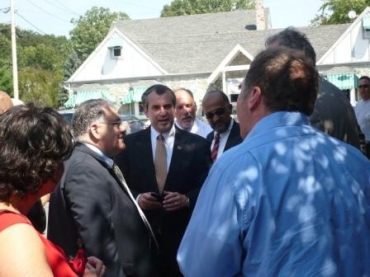