CAMDEN – A federal judge today considered the case of former Olympian Carl Lewis, a Democratic candidate for the state Senate in Legislative District 8 versus Secretary of State (Lt. Gov.) Kim Guadano, and very early wondered aloud whether it was even within his purview to overrule a state-level decision.

“The issue of what citizen means and residency means sounds like state issues, not federal issues,” said the Honorable Noel Hillman.

Earlier this week, Guadagno ruled that Lewis failed to meet New Jersey’s residency requirement, arguing that the would-be candidate’s voting record in California proved he lived on the West Coast these past four years.

William Tambussi, counsel for Lewis, is countering with the argument that Lewis can prove residency here in New Jersey going back to at least 2006 when he received a Garden State driver’s license.

Tambussi wants the judge to uphold a decision rendered by Administrative Law Judge John Schuster prior to Guadagno’s decision. Arguing on behalf of Guadagno, Assistant Attorney General Donna Kelly reminded the U.S. District Judge that Republicans are in the process of appealing Schuster’s decision.

In his preliminary engagement of the judge, Tambussi objected to the four-year residency provision for Senate in the state’s 1947 constitution.

Hillman started by wondering whether he’s even within his jurisdiction to rule on this state-based case.

“We don’t know if the state is ever going to hear this issue,” protested Tambussi, pressing Hillman to make a ruling in the interest of time and legitimating Lewis on the ballot.

“This claim is right to be brought here. It’s separate.”

“Would you feel the same way if I rule against you?” Hillman said. “I’m not saying that’s the way I’m going to go. ..I feel very incompetent to decide (state constitutional issues).”

“I’m not going to comment on that,” said GOP counsel Mark Sheridan. “For my own good.”

While Sheridan also wanted Hillman to rule, Kelly – his colleague representing the state AG’s Office – was not as gung ho in agreeing that the federal court should weigh-in with a ruling.

“With this particular election, we’re not pressed with a military election,” Friedman told the judge. “I’ve been asked by both (sides) if I have a drop dead date.”

That would be the end of next week, May 6, he said, or 40 days prior to the election. The ballots would have been printed this past Monday Friedman said, but for this ongoing case. 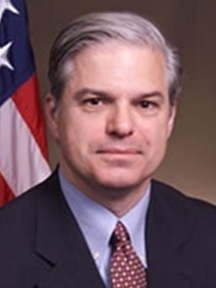