Veteran Assemblyman Joe Malone (R-30) filed to run for re-election, but he hasn’t yet decided whether he’s going to run.

He insists that when he turned his petitions in Monday he just bought himself some time while he discusses the future with his family.

“My decision will be a personal decision,” Malone told PolitickerNJ.com. “This is a four-year commitment, not a two-year term. The issue to me is am I going to spend four more years in office?”

He said he looks at it that way because redistricting pushed him into a new district, the 7th, where he would run on a ticket with state Sen. Diane Allen (R-7) and newcomer Chris Halgas. He doesn’t want to establish himself as the new legislator with a victory only to retire in a couple of years.

This would be four years.

“I’ll come to a decision sometime within the next two to three weeks,” said Malone. “Regardless of what I do, it’s been a helluva ride.”

If Malone runs, he would thrust himself into a showdown with another vet, Assemblyman Herb Conaway, (D-7), who’s running for re-election on a ticket with state Sen. candidate Beverly Mayor Gail Cook and Troy Singleton, chief of staff to former Assembly Speaker Joe Roberts.

“Herbie?” said Malone. “Herb Conaway and I have known each other most of his life. Herbie’s from Bordentown (Malone’s hometown). I see Herb’s father all the time. It’s not like a claymation death match between Herb Conaway and me. Politics has never been a blood sport for me. I’ve never left that building thinking how I was going to carve somebody up. That’s just not me.” 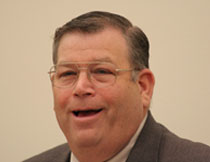