The party pooh-bah message to Stellato, in plain English, is endorse Ridgefield prosecutor Marlene Caride, or else.

The trouble for statewide Democrats, though, is Stellato – a former mayor with hair trigger executive tendencies – doesn’t like being told what to do. In fact, he outright resents it.

But that’s not the Democrats’ biggest problem right now. Their bigger worry is the threat of a lawsuit issued Wednesday by the Minority Coalition, which put a firm thumb in the champagne bottles of the D Team, who just schooled the Republican Party to cap the redistricting process.

The minority coalition is telling the inheritors of Frank Hague that unless they increase the number of minorities on legislative tickets, they’re getting slapped with a suit.

But sources close to Stellato say the chairman, who’s been on the job now a handful of weeks, is not ready to throw former Rutherford Mayor Bernadette McPherson under the bus.

“This one’s definitely going to be decided by the (Sunday) convention,” said a Bergen source.

Not if the higher powers can help it, who are intensifying their outreach to the chairman in the aftermath of Wednesday night’s fiasco, when Stellato didn’t lock in Caride despite state Sen. Paul Sarlo’s (D-Wood-Ridge) and others’ entreaties.

People who know, though, again, say the baseball bat to the knees treatment won’t work with Stellato. It will only drive him farther from where people want him to go.

Complictaing the situation is Hudson County, where Democrats – at least as of Wednesday – were poised to endorse police detective Sean Connors for a 31st District seat now occupied by Assemblywoman Caridad Rodriguez.

In any case, not Hispanic.

State Sen. Nick Sacco (D-32) of North Bergen did manage to select a running mate with a “z” on the end of her name – “Jimenez” – to be formally unveiled later today, to replace retiring Assemblywoman Joan Quigley (D-Jersey City). But with Connors at the starting gate to be Stack’s running mate, it amounts to no net gain in Hudson for Latinos in the Legislature.

That’s why everyone in the party is focused on Stellato.

The Connors announcement was supposed  to pop today but that too has stalled, apparently as the party tries to barter with Bergen. 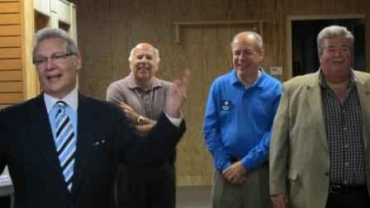