Kean said he is expecting Gov. Chris Christie to fill the first state cabinet position for higher education soon, one of the top recommendations of the task force report.

“I think the governor’s moving ahead,” Kean said. “He told me that he supports that recommendation.”

Kean said the creation of a Higher Education Council will complement the work of a cabinet secretary, “help to guide higher education policy…help to work with the secretary and the staff.”

A bill sponsored by state Sen. Ray Lesniak, (D-20), of Elizabeth, S1609, was passed last year creating the cabinet position, appointed by the governor after hearing recommendations from the N.J. Commission on Higher Education and the N.J. Presidents’ Council.

Sarlo joked as Kean was departing – celebrating his 76th birthday – that as a gift the committee unanimously appointed him the first Secretary of Higher Education.

While testifying, Kean challenged the Legislature to find a champion for the cause of higher education.

“Higher education’s had no voice,” Kean said. “We’ve got great colleges and universities,” but no one in the Statehouse has consistently trumpeted their achievements.

Another job for the legislative and executive branches, he said, was to find and appoint highly qualified trustees for the schools.

“The trustees are central to this,” he said. “Find the best and brightest men and women…Think of these trustees as boards of directors do” in drafting at least one member with fiscal expertise.

The former governor said, “The colleges and the universities have done their best,” given that higher education funding in New Jersey ranks 47th across the country. By contrast, the state ranks in the top two nationally in primary and secondary education funding, Kean said.

Even in tough times, he said, the state must invest in higher education.

“No one understands it more than I do,” Kean said. “I went through two recessions as governor.”

Some recommendations may be too costly, he understands, but, “others you can do and we believe you should look at them very seriously.”

Kean said “anything you can do to relieve expenses,” like passing civil service reform, would be helpful.

Most of all, he said, the toolkit bill that would allow universities to negotiate directly with unions would help alleviate “broad” labor agreements that hurt some colleges, “that don’t address the particular needs of the institutions.”

Sarlo shook off the toolkit pleas: “There will still be a tuition increase.” He said nothing short of more funding for higher education will change that. 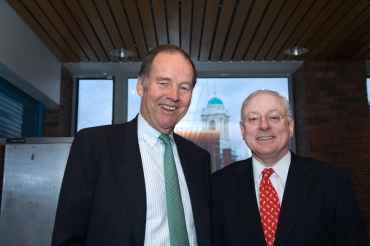