It was four years ago and Bush was tanking badly and Democrats loved it, using voter angst to hungrily seek new territory, including Burlington County, where the Norcross machine had visions of post-election photo ops reminiscent of Neil Armstrong on the moon.

The Dems convinced Assemblyman Francis Bodine to change parties and run for the seat vacated by the retirement of state Sen. Martha Bark. In the midst of losing local elections as a consequence of Burlco Bridge headlines and Bush fatigue, Republicans at the time, as they watched U.S. Rep. Rob Andrews (D-Haddon Heights) land in downtown Moorsetown, had the sinking sense that the initials GN would end up engraved on all county signs before 2008.

But while they would lose two freeholder seats in the coming two years and endure U.S. Rep. John Adler’s 3rd District Congressional victory, the GOP’s 2007 8th District Senate candidate, Phil Haines, had little trouble defeating Bodine, who before the end of the campaign felt the State Democratic Committee’s reservoir of funds yanked out from under him as the statewide press corps concluded he was a gimmick candidate and rerouted to real races in Districts 2 and 12.

On Monday, former 9X Olympic gold medalist Carl Lewis of Medford entered the race as a late arrival Democrat to the district (bought property here in 2005) with South Jersey’s own Senate President Steve Sweeney (D-3) of West Deptford at his side.

Lewis promised he was in to win.

“The Democrats view the 8th as competitive, in part because it is so proximate to their stronghold – right next to George Norcross,” said Dr. Brigid Harrison, political scientist at Montclair State University.

Now Bodine’s only known contribution to sports in politics was when PolitickerNJ.com ran a picture of him perusing a golf magazine in the Assembly chamber – payback from Republican colleagues irritated by his uniform change. The GOP went full-fledged for the sports nut vote when they recruited former Eagles superstar Jon Runyan to run for the 3rd Congressional district.

“The Democrats seem to be looking at the Republican playbook from last year when they successfully ran (now U.S. Rep.) Jon Runyan, a renowned athlete, who proved a name ID sports star can do well – even in an uphill battle,” said Harrison. “The question is can a Democrat win in that district, or is Carl Lewis just a Democratic candidate commanding a flurry of media attention?”

In the aftermath of Lewis’s announcement and the hoopla surrounding a celebrity sighting, Republicans are confident that state Sen. Dawn Marie Addiego (R-8) of Evesham, who last year succeeded Haines, will be able to beat the track superstar.

On paper, the 8th Legislative District became slightly more Democratic as a consequence of redistricting.

In raw numbers, prior to redistricting, there were 40,462 registered Democrats, 41,080 registered Republicans, and 60,265 unaffiliated voters. Now, with the subtraction of Moorsetown, Wrightstown and Tabernacle and the addition of Mount Holly, Pine Hill Borough, Pine Valley Borough, Waterford, Hammonton, Westampton and Berlin, the district’s raw numbers are as follows: 38,714 Democrats, 34,911 Republicans, and 58,141 unaffiliateds.

“We went from a 64% to a 60% Republican performance district,” said Burlington County Republican Chairman Bill Layton. “And there are other factors that work on Dawn’s behalf. Her family, for example, is from Hammonton. Once we get into the issues, and the senator talks about equal funding for education in the suburbs, she will do very well.”

A North Jersey Democratic Party operative groaned at memories of Evesham, Addiego’s Burlington County hometown, that D’s cash cowed into briefly controlling just before the trends shifted against them with the rise of Gov. Chris Christie, who would win Burlington 48.41% to 45.79%. The Dems knew they were standing on shifting sands when one of their party’s local Evesham architects, former Mayor Randy Brown, pulled a Bodine in reverse and transferred from D to R just last year.

“We’ll run hard,” Russell said. “Dawn is probably the most popular elected official in Burlington County besides Diane Allen, who had a head start on Dawn with television.”

Harrison said the press attention proved valuable for Runyan and could pay some dividends for Democrats – if not Lewis.

“There is media infatuation with sports stars turned politicians,” said Harrison, “and that media attention can be worth a lot in a campaign, but he will have to move beyond his area of expertise and need to talk about issues more than just his folklore hero status.  The Runyan campaign was the next football game. This is the next race. That is part of the appeal – the question of whether people who are successful in one walk of life can translate to another. His stature makes this much more competitive, but if nothing else, it will make Republicans spend resources in the 8th where they might otherwise spend them in the 38th and 14th.” 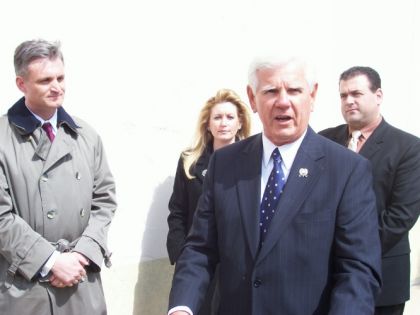