Administrative Law Judge John J. Schuster today decided that legendary Olympian Carl Lewis of Medford is elligible to be a candidate for the state Senate in Legislative District 8, overruling Republican claims that Lewis does not fulfill residency requirements.

“I conclude that petitioners have standing to bring this action,” Schuster wrote in his decision, ruling against that portion of the Democrats’ argument.

“I further conclude and find,” however, he added, addressing the request for Lewis to be tossed off the ballot, “that petitioners have not met their burden to demonstrate respondent has not attained resident status to seek State Senate office.  That is not a finding that respondent has attained such status, however, because the severely limited time constraints in hearing and deciding this matter have not permitted a fully developed record.”

“We will appeal,” Layton told PolitickerNJ.com on Wednesday.

A nine-time Olympic gold medalist who owned property in New Jersy since 2005 but only last week registered to vote in the Garden State, Lewis is challenging state Sen. Dawn Marie Addiego, (R-8), of Evesham.

“I’m not surprised that petition was dismissed as Republicans clearly did not prove their case,” said Lewis’s attorney William M. Tambussi.

Schuster’s administrative law office this afternoon sent copies of his initial decision to the attorneys in the case and to Lt. Gov./Secretary of State Kim Guadagno.

“It will be interesting to see if the Lieutenant Governor will agree,” Tambussi said.

In a statement released following the judge’s verdict, Lewis said, “I am very gratified with today’s decision by the administrative law judge. I’m confident that the Lt. Governor will uphold the ruling so that we can devote our full attention to the real issues facing the residents of the Eighth District. The voters want to know where the candidates stand on the serious issues facing New Jersey and their visions for the future. They’re not interested in partisan sideshows that distract from that important discussion.”

Less than a week after Lewis filed to challenge Addiego in this year’s general election, Republicans issued a legal challenge to the fire-tested sports competitor.

“Mr. Lewis has affirmatively represented to the public that during the past four years he was a resident of the State of California and the State of Texas,” Republican attorney Mark Sheridan of Drinker Biddle and Reath wrote to Schuster in making the GOP argument.

“The information concerning his residency was removed from his website immediately prior to April 11, 2011, the date when he announced his candidacy and filed his nominating petition.”

But Schuster was not convinced the GOP made its case.

Below is his reasoning drawn from his initial decision rendered this afternoon.

“Respondent counters those arguments by stating that when he moved to Mount Laurel in 2005, his intent was to be a New Jersey resident and he began that process at that time by selling the real estate he occupied in Texas in that year.  He also argues that he never held a California driver’s license and has had one issued by the State of New Jersey from 2006 until the present time.  Respondent produced those documents during the hearing, they were examined by the Court and counsel and returned to the respondent after all parties recognized and acknowledged their reliability.  He states that he purchased a substantial residence in Medford on November 16, 2007, after he moved from his Mount Laurel condominium.  In addition to owning real estate in New Jersey, respondent claims to have sufficient contacts to confirm his residency through his coaching activities at Willingboro High School, participating in church activities and being a sponsor for his foundation and the Best Buddies Chapter which he helped establish in this state.

“Respondent submits two counter-arguments to petitioners’ challenge.  The first has to do with petitioners’ right to bring this matter based on standing as they are members of the Republican party and respondent claims they are not aggrieved and therefore have no standing regarding a Democratic primary election.  In support of its position, respondent cites a number of cases all having to do with individual’s rights to sign nominating petitions.  Those cases hold that political parties have a viable interest in having their primary elections not undermined by outside interests.  Smith v. Penta, 81 N.J. 65 (1979).  However, it has also been held by way of initial decision from the Office of Administrative Law in Wisniewski v. Struben, ATG 2637-01, Initial Decision (May 17, 2001), <http://lawlibrary.rutgers.edu/oal.search.html>, that a Democrat incumbent assembly member had standing to challenge a nominating petition for a Republican party primary because he was a qualified voter of the district who has standing to bring a challenge in vindication of a public right to require compliance with provisions of the pertinent election statutes.

“Respondent also argues that the residency requirement set forth in the New Jersey Constitution as applied to this respondent violates the Equal Protection Clause of the Fourteenth Amendment of the United States Constitution.  I FIND the constitutional issue is not a proper challenge to bring before this Court at this time since the State is not represented in this matter.  I further FIND there have been insufficient facts presented to determine whether or not there would be a compelling interest to alleviate a four-year residency requirement as set forth in the State Constitution.”

“We’re going to file an objection, he got the burden wrong,” said the Drinker Biddle attorney. “The burden was on Mr. Lewis to affirmatively establish that he was a resident of New Jersey. Based upon the opinion, Lewis did not do that. As a result, he should be thrown off the ballot.” 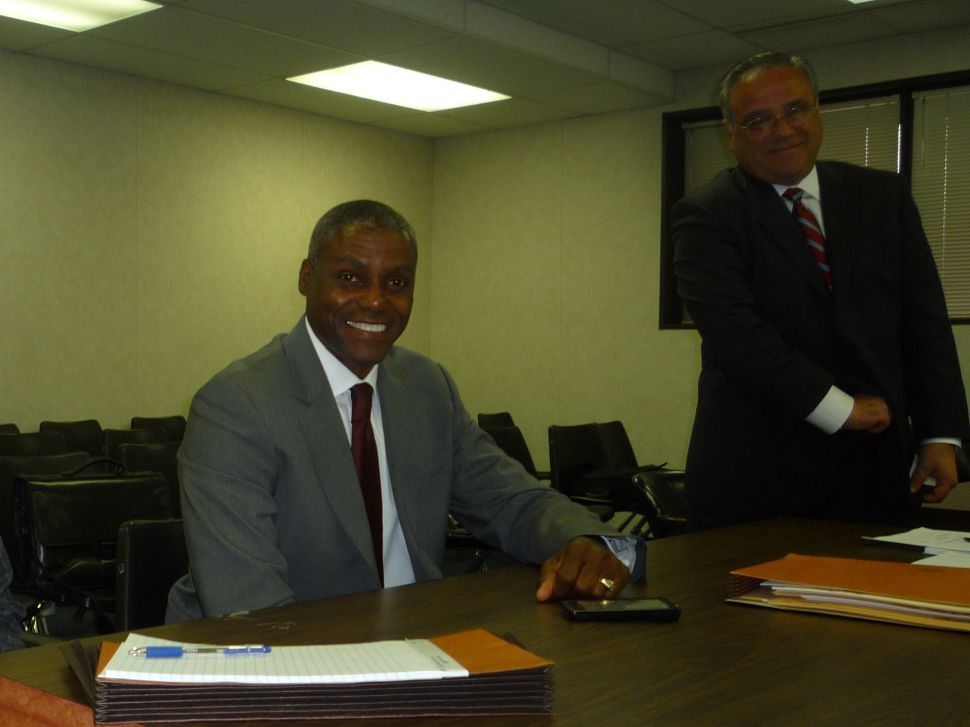