Democratic state Senate Candidate Carl Lewis says he knows who he is after 49 years and no matter what, running for elective office won’t change that.

The former Willingboro High School track star and nine-time Olympic gold medalist said he hopes the campaign can remain civil and said no matter what happens in the race against Republican incumbent Dawn Marie Addiego, he will not go negative.

The new candidate said he is still getting acclimated to the political waters and was vague about his platforms, saying he would release them soon.

And though he hasn’t yet digested the governor’s sweeping plans for education and tenure reform, one thing he knows, Lewis said, is that he wants to improve education and specifically, physical education for children.

“We have to find ways to help our kids stay healthier and give them a better chance,” said Lewis, who volunteers as a track coach at Willingboro High School.

As for how he sees the campaign playing out, Lewis is pragmatic.

“It’s politics, so I’m sure they’re going to come after me on a lot of things, but that’s okay.  I won’t let this race define me.”

There is a lot to talk about in the former Olympic star’s life.

First and foremost, there is unparalleled success on the track, where he won 10 Olympic medals and 10 World championship medals.   There is his foundation, which he said gives scholarship money for not only sports, but academics and the arts as well.

But there has been a stormier side as well. One that he hints could be used against him in the election.

There are allegations of performance enhancing drug use. Lewis tested positive for banned substances before the 1988 Olympics, but was cleared when he said he took the banned substances – stimulants found in cold medicines – inadvertently.

There is the talk that he cost himself millions in endorsements and public goodwill because of his perceived arrogance after winning four gold medals at the ’84 games.

And there is one really bad rendition of the National Anthem.

But Lewis says much of what has been said and written about him is par for the course for a celebrity athlete.  Many people might not look good in the glare of the spotlight, Lewis said.

“There is no one in this race who has had every aspect of their life parsed like I have,” he said.  “Think about if anyone had a camera on them their whole lives, are you kidding me?”

About the allegations of arrogance he says “I was 22 at the time.  Thank God I’m not the person I was when I was 22.”

But though his life has included celebrity, fans, renown and world travel, Lewis still calls running for state Senate ‘the craziest thing I’ve ever done.”

He has remained grounded throughout his life, he said, by keeping his friends close.  He still remains friendly with his former high school track coach, who attended his election kick-off.  Of his college coach he says, “He was like a father figure to me.”

But he reserves special praise for his mother.

Her message to him?

“Just make sure you don’t have to come back and live in MY house,” he said she told him.

The election season in the 8th District promises to be scrappy. Addiego is a veteran and the district leans heavily Republican.  The incumbent has already sought to paint Lewis as yet another cog in the George Norcross-controlled Camden County Democratic machine and called the rookie candidate out for “grandstanding” over a press release Lewis issued asking Addiego out to lunch.

The incumbent’s camp also has criticized Lewis for dodging questions on issues, saying they’d love to hear his stance on how he plans to “solve the problems his party created in Trenton.”

He knows he’s in for a fight.  But win or lose, Lewis said, he’ll still head to Willingboro High School on the day after the election to help coach the track team there.

“I’ll go either way,” he said. “The difference is I might go as a senator.” 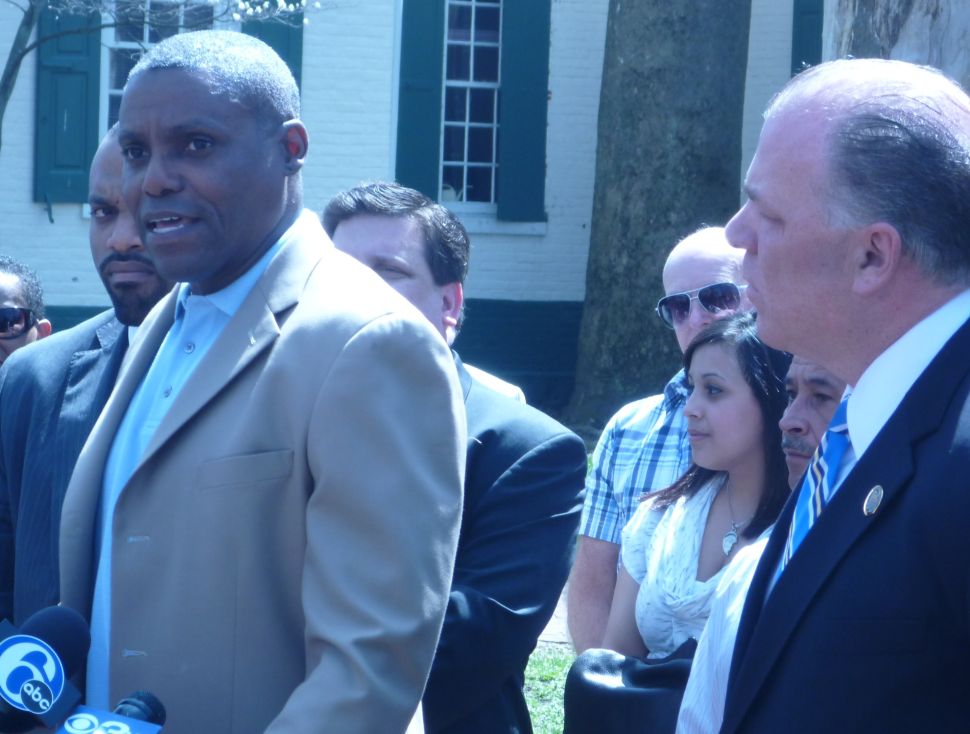