Bergen County Freeholder Bernadette McPherson has withdrawn her bid for a 36th District Assembly seat and endorsed Ridgefield prosecutor Marlene Caride for that seat, and Assemblywoman Joan Voss of Fort Lee for McPherson’s freeholder seat, which is up this year.

McPherson and Caride were racing toward a head-on collision when McPherson, a former Rutherford mayor, stopped the madness in the name of party unity and called Caride at the latter’s Union City law office.

“I have been grateful and overwhelmed by the support shown for me to run for Assembly in District 36 both in Bergen County and Passaic County,” McPherson said. “I would especially like to thank Passaic County Chairman John Currie for his enduring friendship and encouragement and City of Passaic Municipal Chair Ritzie Morales for her enthusiasm, warmth and generosity of spirit.

“Throughout the course of my career in public service I have been blessed with a loving family, loyal and true friends, and dedicated supporters both in Rutherford  like Municipal Chair Denise Ross and her entire County committee as well as those in the Bergen Dems.  I am deeply indebted and grateful to all of them for all they have done for me.With their help my goal has always been to see to it that Democratic candidates are elected to uphold our core principles and values. My goal has always been to unify our party to ensure we have success in that.

“I am proud that in both word and deed I have demonstrated my commitment to ensuring our party provides opportunity for all.  I have no desire to step away from that commitment nor abandon my goals in the interest of attaining an Assembly seat. For that reason  I don’ t intend to run for Assembly in District 36 and will support the candidacy of Marlene Caride.  Furthermore, I wish to extend my best wishes and support to my dear friend and running mate Freeholder David Ganz and Assemblywoman Joan Voss for Bergen County Freeholder seats. John Hogan has my full support for his candidacy as County Clerk as does Judge Michael Dressler for County Surrogate.  I wish you great success as you undertake the responsibility of leading them to victory.”

Redistricted out of the 38 and into presumptive public servant retirement, the news suddenly buttressed Voss, while placating a party sweating the absence of a Latino pick-up in the legislature.

Stellato also endorsed both Voss for freeholder and Caride for the assembly.

Caride had received the call from McPherson but not yet the chairman.

“I had  an opportunity to speak with Bernadette earlier,” Caride told PolitickerNJ.com. “I look forward to having a friendship with her. It still hasn’t all sunk in yet. But Bernadette was kind enough to call me. She was very kind, and she offered to provide me with any information I may need about the district.” 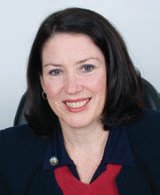