Speaking before a small crowd at a side street gas station in Bergen County, Sarlo stood with an unlikely cadre of right wing stalwarts at his side, one of whom doesn’t believe in manmade global warming – although Sarlo said his reasons are different.

The RGGI program, referred to as Reggie, is a northeastern alliance of nine states that levy a surtax on carbon-emission power plants and dedicate the funds to clean energy development. It’s also the nation’s first carbon trade system that was intended to reduce greenhouse gas emissions 10 percent by 2018.

But the rallying cry across a few states mulling RGGI repeal is that Wall Street is cornering the market by buying up carbon credits while ratepayers are getting the shaft.

That’s why Sarlo is in Rutherford today, he said, because these dedicated funds are being misappropriated by executives of both parties – undermining what he views as admirable ecological and environmental priorities.

Sarlo said he would also back state Sen. Bob Smith (D-17), of Piscataway, a staunch opponent to RGGI repeal, who wants a ballot question before voters for constitutional dedication of RGGI funds – not just by the current statute, which has proven unenforceable in the face of budget-plugging politicians.

“I would support that,” Sarlo said, of Smith’s campaign. “This is a transparency and honesty issue,” not an anti-environment, pro-polluter issue.

But Sarlo’s stood with free market Republicans, government-shrinking Tea Partiers, and former gubernatorial candidate Steve Lonegan, state director for the rightwing advocacy group, Americans for Prosperity, many of whom are not at all concerned with the environmental impact total repeal could have.

The RGGI program requires power plants to buy one pollution credit at auction for every ton of greenhouse gases they release, which has so far generated $850 million.

Lonegan and AFP are looking at RGGI through an economic lens, its effect on small business owners, which is why they’re at this gas station today.

“This is nothing more than a new tax,” Lonegan told State Street Wire, “a tax on ratepayers…This is just another source of revenue for the government.”

He is critical of the fact that governments are selling off credits at a much reduced cost from what the credit purchasers will likely sell them for in the future.

“Speculators buy and hold these things until they gain interest,” he said, which makes this a short-term solution for the taxpayers and a long-tern boon for investors.

It’s not that he opposes short-term investment in clean energy, but not in a way that creates profits for investors and levies yet another passed-on tax that business owners need to deal with. “If you want to invest in clean energy technology, invest in it,” he said, but don’t mortgage the future value of carbon credits to fund the program.

Environmental advocates point to AFP’s oil and coal mogul backers – whose businesses are adversely affected by clean energy programs like this – as the group’s hidden agenda: protecting polluters.

“Standing with Americans for Prosperity, which is a front for the coal lobby funded by the biggest corporate polluters in the United States shows the level of Sen. Sarlo’s anti-environmental agenda,” said Jeff Tittel, Sierra Club state director, who stopped by Rutherford today to quietly voice his dissatisfaction.

New Hampshire recently repealed their enrollment in the program, and Maine is also considering withdrawing.

Gov. Chris Christie is open to repealing New Jersey’s enrollment, which is why state Sen. Michael Doherty (R-23), of Washington Township, was in Rutherford today. He hopes the likes of Sarlo, a top-tier Dem, signing on might swing some Democratic support for a bill that has 41 backers in the two houses, plus an open-minded governor.

Doherty doesn’t believe in global warming, so his problems with the program start with environmental skepticism and end at the already empty pockets of ratepayers.

“I’m glad (Sarlo) joined and sponsored the bill,” Doherty said, even if the two sides have “slightly different motivations.”

Sarlo told reporters today that he has no timetable for moving repeal legislation through the houses. “I still have to talk to my colleagues,” he said.

He was congratulated on his stance by Tea Partiers in the crowd, before telling State Street Wire he doesn’t mind siding with what are usually natural political enemies.

“Steve and I come from different angles,” he said, but noted that they teamed up in the past as Bergen County mayors in opposition to noise and air pollution caused by Teterboro Airport.

“This is a Wall Street money grab that’s killing the small business owners,” he said. “This is purely an economical thing.” 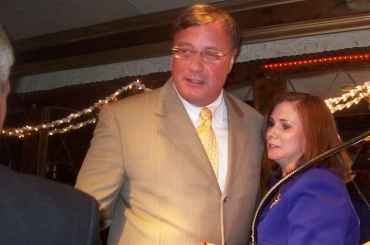