“I know Carl and Carl is going to surprise a lot of people,” said Rice, who arrived at the state Division of Elections this morning to file his petitions to run for re-election.

“They know me here,” said the veteran, with a wink, addressing an ally as Rice emerged from his session with elections workers.

A Democratic challenger to state Sen. Dawn Addiego (R-Evesham), Lewis of Medford is expected to announce his decision at 2 p.m. on the old Courthouse steps in Mount Holly.

“That’s a district that picked up a few more Democratic towns,” said Rice. “Carl can win. The state Democratic Party, of course, has to put the resources into that race to help him. Sometimes the party is great about asking you to run and then leaving you hanging.”

Running for re-election in the 28th with Assemblywoman Cleopatra Tucker (D-Newark) and Assemblyman Ralph Caputo (D-Nutley), Rice said he’d be happy to campaign with Lewis – if Lewis believes Rice’s presence can help him beat Addiego. 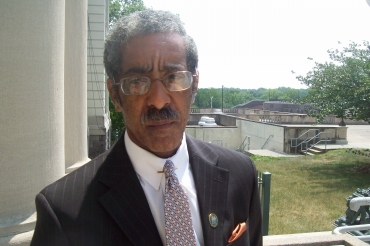