Concluding there is “credible evidence” that he has not lived in New Jersey for the four years required by the state Constitution, Lt. Gov./Secretary of State Kim Guadagno this afternoon decided to throw Carl Lewis off the ballot in the 8th Legislative District.

Her decision came less than a week after Administrative Law Judge John J. Schuster ruled in Lewis’s favor on a petition by Republicans to jettison the Democratic candidate based on a fuzzy residency record.

“Respondent instead owned three homes in California, filed his taxes in California; was registered to vote in California; voted in at least four elections in California; certified under penalty of law that he was a resident and domiciliary of California each time he voted; and had his business and his business offices in California. Reviewing all the indicia of residency including the statements of the respondent and the facts of his domicile, and especially examining, but not solely relying upon the fact of his California voting record, I find that respondent was not a resident of New Jersey for the constitutionally required four years prior to the date of the election for the office he now seeks.”

“Today’s decision is unfortunate but not unexpected,” said William Tambussi. “It is clear that this Administration will do anything to keep Carl Lewis off the ballot. We are not going to let that happen. Carl Lewis is and has been a legal resident of New Jersey and it is unconstitutional to declare him otherwise.”

“We are gratified that the Secretary of State and her legal counsel took the time to review all the facts and agreed with our position that Mr. Lewis does not meet the 4-year residency requirement to be a candidate for New Jersey State Senate,” Russell said. “Mr. Lewis himself admitted under oath that he was a registered and active voter in California as recently as 2009; that he didn’t file his income taxes in New Jersey, and that he only registered vote in this state on the day he announced his candidacy. Based on those facts alone, it shows how desperate the Democrats were for a candidate that they would be willing to so quickly jump on Mr. Lewis’ baggage-filled, bandwagon without vetting him first. Today’s decision clearly states that ‘the right to run for office is not unlimited,’ even for carpetbaggers like Carl Lewis who believe that their celebrity can trump everything, including the law.”

Against the backdrop of Guadagno’s impending decision, Lewis in a Philadelphia Inquirer news story today said Gov. Chris Christie made a backroom effort to convince him not to run then dumped plans for a youth athletic program Lewis wants, a charge the Christie administration called “silly.” Burlington Republicans said it sounded like desperation.

The nine-time Olympic Gold Medalist and self-described global citizen announced his candidacy on April 11th. A political neophyte from Medford, Lewis sought the Democratic nomination to run against Addiego.

In challenging Lewis’s petitions, Burlington County Republican Chairman Bill Layton said the California property owner never proved he lived in the 8th District. He’s owned property in Medford, and has a New Jersey driver’s license issued in 2006, but voting records show Lewis voting in California as late as 2009 and not registering as a New Jersey voter until the same day he filed to run for the state Senate.

Today, Guadagno backed up the GOP argument with her decision.

“Although respondent claims a desire to reside in New Jersey, his actions in this case speak louder than his words,” she wrote. “At best, it was not until November, 16, 2007, when he purchased his own home that he committed himself to New Jersey and, even that flies in the face of his voting record and business dealings in California which continued through 2009.” 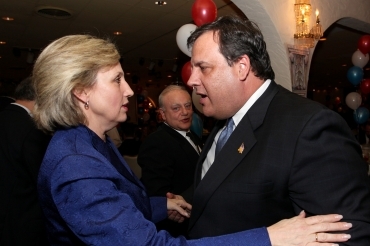