Though his petitions were ready, after consultation with his family and supporters, Russo cited the limited chance of winning in the June 7th primary against the Democratic organization line.

“Although I received 48% of the vote on Line D in 2008 running against the issue of dual office-holding, and would have done well again in any primary,  I am not in this just to win for myself,” said Russo.  “I am concerned about attempts to dismantle our Public Schools, destroy  teachers, firefighters,  police and other  public workers’ rights,  and  weaken consumer financial protections,  which has been my career for many years.”

In his 2008 freeholder campaign against Assemblyman/Freeholder Ralph Caputo, Russo famously entertained supporters with a double dip ice cream social in Bloomfield, complete with flavors named after his old adversary. 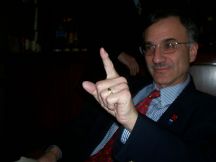