Three months after getting sworn into office at the statehouse, Assemblyman Kevin Ryan (D-36) of Nutley is making preparations for departure.

Not in cuffs, not in disgrace, not the victim of the inevitable bloody business of a ballot box war, but because the consequences of a piece of paper with lines drawn on it zigzagged the relative newcomer out of political existence right now.

“I loved that district,” Ryan told PolitickerNJ.com, when he saw the after-effects of redistricting that pushed him into Newark as a would-be running mate of state Sen. Ronald L. Rice (D-28) of Newark on the new map. “Nobody was happier than me until yesterday. I was looking forward to serving, but one hour is a long time in politics. I learned that yesterday.”

Jarred by redistricting into a three-way fight with two legislators in the 29th District itching for re-election, Assemblyman Ralph Caputo (D-28) of Belleville, a veteran party player who goes back to the beginning with Newark North Ward Democratic Party leader Steve Adubato, vowed to move to Nutley to save his seat.

That put him in a two-man, one-seat game of musical chairs with Ryan – a game that Ryan lost last night.

“I got a call from the chairman, and that was that there was now a similar problem as there was in the 29th District, where you had three people –  all three great legislators and great people, in my opinion, going for two seats. I understand it was a difficult decision for the chairman to make, and me being the new guy on the block, I understand. Senator Rice, Assemblywoman Tucker and Assemblyman Caputo have served together as a team. I’m a party guy and I will always be a party guy. I’m really looking forward to finishing the year.

Ryan took the vacant 36th District seat following the abrupt retirement of Assemblyman Fred Scalera, who went to a private sector job and left his staff behind to serve Ryan. Personnel included Joe DiVincenzo, Jr., the son of the powerful Essex County Executive of the same name. Almost from the beginning, stories suggested Ryan was a loyal soldiering placeholder for the executive’s son, and at the very least the keeper of a part-time professional refuge for Joe, Jr. as the younger DiVincenzo assessed his political future.

“Nobody has approached me about keeping the staff in place for Ralph Caputo,” Ryan said.

He also denied that he was a placeholder.

“Joe, Jr. has an interest in politics and someday down the road he may make a great assemblyman or maybe even county executive, but Joe DiVincenzo made it clear to me that I was definitely there for a two-year term. My petitions were ready to go.”

There was buzz this week that Ryan’s stand-down from the Assembly seat would budge Sheriff Armando Fontoura off his longtime perch to make room for Ryan as Essex County’s top cop.

“Sheriff Fontoura and I are joined at the hip, he’s been here over 20 years and I’ve been his right arm. I support him for another term, and he’s saying he plans to run again. I’m willing to serve however the party bosses want me to. The day Ralph Caputo is no longer interested, Kevin Ryan is definitely interested. It’s been the honor of my life to serve. They are a great bunch of people in Trenton.” 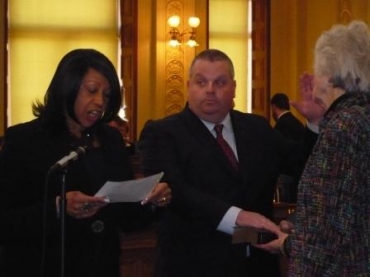