TRENTON – State Sen. Brian Stack, (D-33), of Union City, had his lot in with the other party during the redistricting process, but it hasn’t kept him from demanding respect of his county Democrats.

Chalk it up to deference for Stack’s formidable base and fear of a multimillion-dollar inter-party battle, a la 2007, when Stack bounced Hudson County Democratic Organization-backed Assemblyman Silverio Vega in the race to snatch up Hoboken’s state Senate seat, gone with the retirement of stalwart legislator Bernie Kenny.

Ironic, maybe, that when Stack came back to the HCDO this year – with the unspoken threat of outright war hanging in the post-industrial air – it was Hoboken again that got screwed. Well, at least that’s the perspective of Mayor Dawn Zimmer’s loyalists.

They say Zimmer and the allied Hoboken Democratic Committee were ignored – phone calls, texts, and a letter – by HCDO Chairman Mark Smith, mayor of Bayonne, and his associates.

Smith was in a precarious situation in Jersey City with the redistricted 33rd District coming up short for an Assembly seat – and Stack needing to come through the county organization, or dig a trench and man his parapet.

Connors was, according to sources, owed a freeholder seat by Healy, but instead was given this opportunity to join Stack’s team in Trenton.

Stack needed something in return to take on such a live wire as Connors, who few expect to be a puppet for the Union City mayor.

Losing one of his Assembly soldiers, Stack made sure to protect his other, Hoboken Assemblyman Ruben Ramos, according to sources, by trading the Connors candidacy for a guarantee that Ramos would get the county line in opposition-controlled Hoboken.

The Democratic Party in Hudson County, like similarly Dem-rich, GOP-poor Essex County, affords the line ballot position to whomever the party chairperson selects. They have no convention with committeeperson votes, although the common practice is to poll the municipal committees for local input.

Hoboken Democratic Chairman Ravi Bhalla contends that he submitted Hoboken’s input – “a virtually complete list of a slate of candidates,” he told PolitickerNJ today – in the form of a letter last Friday to Smith, and amending email on Monday morning.

Smith, in an emailed statement this morning, said the Hoboken input was neither timely, nor complete.

“Every Municipal Democratic Chairman was encouraged to provide the County Organization with their complete slate of county committee members in time for the filing by the April 11 filing deadline,” Smith said. “Most Hudson communities provided the necessary information over the weekend. Unfortunately, the Hoboken Democratic Chairman Ravi Bhalla did not, making the countywide filing process that much more difficult. When the Hoboken information was finally received, it was clear that they were unable to field a complete slate of candidates.”

His claims were rebutted as “factually incorrect” by Bhalla, but Smith didn’t stop there.

“To add insult to injury, instead of working to secure the party line for his county committee candidates, Chairman Bhalla was busy plotting his own run for Assembly in the 33rd legislative District against the Democrat’s choice of Assemblyman Ruben Ramos and Sean Connors,” Smith said. “It is unfortunate that Ravi Bhalla chose to advance his own personal political career and neglected his duty as Hoboken Democratic Chairman. Apparently Ravi Bhalla thinks he can have things both ways. On the one hand he expects his slate of committee candidates to win the endorsement of the county Democratic organization while on the other hand he has personally made the hostile move of filing to run against the organization’s officially endorsed Assembly candidates. To make matters even worse, Bhalla’s Assembly candidacy was a surprise attack on the HCDO at the eleventh hour filed without even the courtesy of a phone call to the County Chairman.”

On this point, Bhalla and Zimmer couldn’t disagree more.

They said that HCDO operatives close to Smith asked that Bhalla have his petitions ready as a contingency plan – for what, no one knows.

“Ravi was very interested in running anyway,” Zimmer said, but, “They asked (for petitions to be prepared).” Over the weekend, Bhalla rounded up the necessary signatures. “I fully support Councilman Bhalla’s candidacy. I am extremely glad that he decided to run,” Zimmer said.

Numerous attempts to speak directly to Smith were unsuccessful, she said, including an in-person snide slink away at a recent fundraiser sponsored by – who else – Bernie Kenny.

“They had knowledge,” she said.

Smith concluded his statement: “(Bhalla is) entitled to run. I wish him well but he’s naive if he thinks we are going to support his allies while he runs against us.”

Bhalla said other than a “very minor modification” made to the Hoboken-supported committeeperson and candidate list on Monday morning via email, it was near complete on Friday.

“That appears to be an excuse for a political decision they made,” Bhalla said. The request for municipal recommendations was sent out at 1 p.m. on Thursday with responses due at 5 p.m. the same day, and although he responded on Thursday as asked, his submission wasn’t completed until Friday (then amended on Monday in a fashion acceptable to the party org), he said. He supplied email correspondence to support the submission times.

Zimmer said Smith and the HCDO’s decision wasn’t based on “any artificial deadline, it was made on a backroom deal with Union City Mayor Brian Stack.”

Around the same time that the Bhalla letter was sent to Smith, a letter from committee person and longtime political interloper Michelle Russo arrived at the HCDO.

Russo’s letter recommended a full slate of anti-Bhalla/Zimmer, pro-Ramos/Stack candidates, which was ultimately the basis for Smith’s accommodations.

Russo did not answer a request for comment, but emails obtained by PolitickerNJ show her letter to Smith came in hours after Bhalla’s letter.

Russo’s  husband was mayor of Hoboken from 1993 to 2001 before his arrest for political corruption. Her son, Michael Russo, resigned his vice presidency of the Hoboken City Council last week after video of his meeting with famed snitch Solomon Dwek surfaced in the wake of the Jersey Sting tome that outed the younger Russo.

Councilman Russo is part of a cross-town alliance against Zimmer and her reform team.

He’s joined by Ramos, Councilwoman Beth Mason, and developer Frank Raia, among a host of others.

“It’s unfortunate that the Democratic Party has chosen to align themselves with the Russo line of Democratic candidates instead of the duly elected mayor and party chairman,” Bhalla said. “It does speak volumes. This shows there’s no place for reformers in the county Democratic political machine.”

Zimmer agrees, and openly questions whether anyone should be siding with Russo, who is up for election in the city ward races this year – and who Team Zimmer is desperately trying to soften up.

No one expects Bhalla to come close to Ramos this year, but Ramos is rumored as a potential mayoral candidate against Zimmer in 2013 – so power over the committee seats could be crucial going forward.

In the meantime, the mayor’s team in the mile-square city is going to concentrate on gaining the majority of committee seats off the line – akin to what Jersey City Councilman Steve Fulop is trying next door. 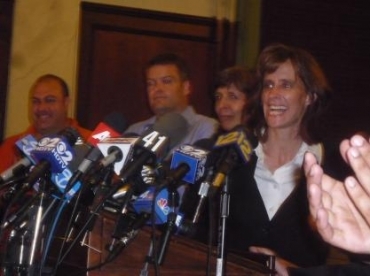