The state DEP announced it had made agreements with the Flemer Family to preserve the acres, at a cost of $27.8 million from state, county and local government funds. More than 1,000 acres will be preserved as open space, of which 512 acres will be used for the creation of state wildlife area and another 500 acres will help expand greenways in the Monmouth County Park Systems’ Crosswicks Creek and the Mercer County Park Commission’s Crosswicks Creek.

The other 900 acres will be preserved as farmland. While the family will still run the farm, there will be a deed restriction placed on it and the property could never be developed.

The property is situated in and around Princeton Nurseries in Upper Freehold, the setting for Monday morning’s ceremony.

DEP Commissioner Bob Martin said the land preservation agreement was the result of ” a collaboration” among local, county and state governments that made a decision “to pool money to keep and preserve land.” The state agencies behind the deal include the DEP and the State Agriculture Development Committee.  The SADC contributed $11.4 million toward the acquisition.

Monday’s occasion was also an opportunity to highlight the state’s Green Acres program, which since its inception 50 years ago has preserved 650,000 acres.

The majority of the land involved in today’s announcement is in Upper Freehold in Monmouth County, with additional parcels in Hamilton Township in Mercer County and North Hanover Township in Burlington County. 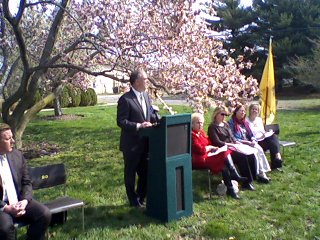