Dr. Felix Roque’s West New York mayoral campaign continued to jab away today at what it sees as the most obvious soft underbelly of the Vega Team: Commissioner Gerry Lange.

When he wrote the ticket he alleges that a man approached him and asked, “Do you know who I am?” Medina said, “I had no idea who this man was.” Roque said Commissioner Lange – who’s running for re-election with the Vega team and an employee of the parking authority’s – continued to harass Medina about writing the ticket and repeatedly told Medina that “You work for me.”

The following day, the head of the parking authority told Medina that his services were no longer needed. Medina was told that there was a meeting and that the “authority was going in a new direction without him.” Medina stated that “without a doubt I was fired because of Gerry Lange.”

“This is how the Vega team works,” Roque said. “They rely on threats and harassment. Vega uses the same tactics that Castro is known for. As a physician I would suggest that Lange see a psychiatrist for anger management.”

Medina, Roque said, “was just doing his job and because he did not know who Gerry Lange was he gets fired.”

Vega Campaign Spokesman Paul Swibinski said there was a simple explanation for the incident.

“The headquarters at 6120 Bergenline Avenue was very busy, with literally hundreds of people going in and out,” Swibinski said. “This created a little bit of a problem for small business owners in the area. There was a driver of a delivery van with New York plates trying to access a convenience store, and Commissioner Lange happened to be outside the headquarters. He told the driver, ‘don’t worry about it, make it quick,’ as a courtesy to the store owner.

Moments later, Swibinski said, Medina appeared and started to give the man a ticket.

Lange said it was all right, he already talked to the driver and when Medina proceeded to issue the ticket anyway, Lange said, “Do you know who I am?”

“He’s the assistant director of West New York Parking Authority,” Swibinski said. “Medina said ‘I don’t care who you are.”

Lange took the ticket and gave it to the Vega Team’s treasurer in hopes of using campaign funds to pay the ticket.

“If we can’t do that, someone will pay for it out of pocket,” the campaign spokesman said. This afternoon, the treasurer told Swibinski the Vega Team will not be able to pay for the ticket using campaign funds.

Lange called Harold Schrader at the Parking Authority to discuss the episode, according to Swibinski, and Schrader told him, ‘Don’t worry about it, I was going to terminate Medina anyway. I don’t need him. We’re re-organizing.”

A Union City resident, Medina was the last person hired for the part-time job and consequently had the least seniority.

This is the second time during this campaign cycle that Lange has provided the opposition with fender fodder. Cops charged him with leaving the scene of an accident in January.

“Commissioner Lange is known for having a temper,” said Dr. Count Wiley, one of the candidate’s on Roque’s ticket. Lange was previously charged with assault in 2007 as a result of a domestic violence dispute.

Medina has indicated that he has consulted an attorney to pursue a case for wrongful termination.

The attack by Roque in the aftermath of the incident came after the challenger ate a steady diet of attacks from Vega, whose team spent the last three weeks zapping Roque for not releasing his tax returns; for taking $10,000 in campaign contributions from an adult daycare operator, which he has to given back owing to campaign fund limits; and for running a candidate on his ticket who has issues with the city over residential property he owns that he has illegally chopped into apartments. 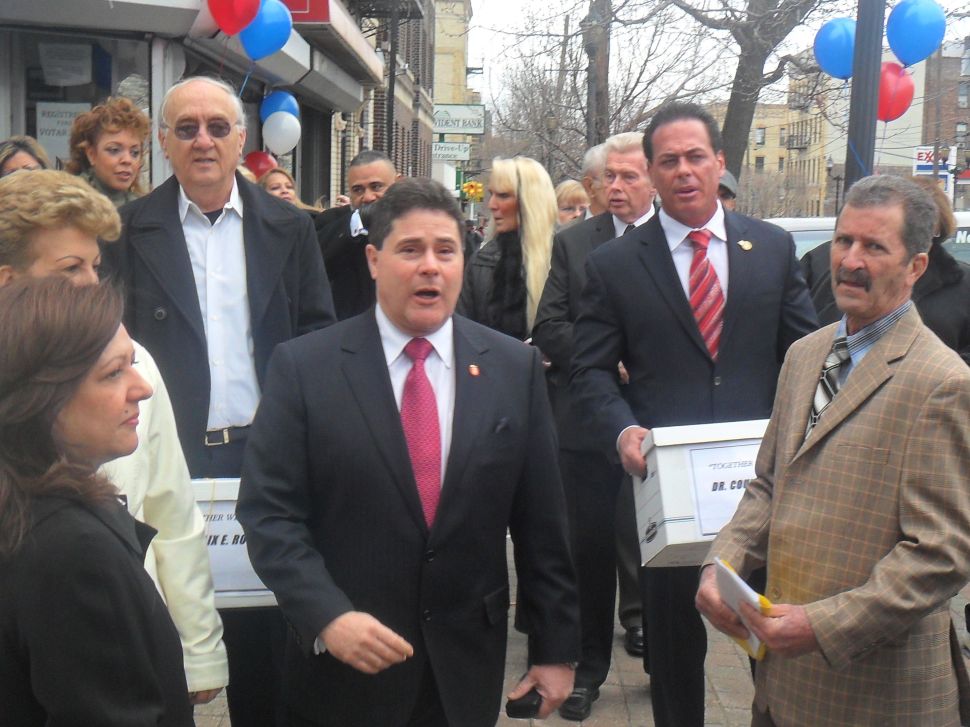