CHERRY HILL – They came Wednesday to honor the memory of John Herbert Adler, a New Jersey exemplar, a self-made man of Horatio Alger levels, a man of law, a family man, and a man of the people.

“It seems surreal,” Rabbi Jerome David said. “John died – too soon, too young – after a three-week battle (in the hospital) surrounded by you, his family, surrounded by a very dedicated circle of friends,” he said. “But he died knowing he used his intelligence and skills to help people – to really make a difference.”

Another rabbi spoke of his humble leadership, reading a passage in Hebrew and translating to English: “It is not the position that honors the man; rather it is the man who has honored the position…He saw himself as a public servant in the best sense.”
The rabbi recalled a particular moment that exemplified Adler’s joie de vivre, when the Harvard-schooled pol would exit a stage – ignoring completely the half-stack of steps attached to the side – and he would bound off the front onto the people’s floor.

Adler’s law school roommate and best man remembered the breezy personal: “He really did believe that worrying was just a waste of energy. He really believes that any setback was just an opportunity for something good to happen.”

During the lame duck session last year following Adler’s campaign defeat, the man recalled the South Jersey native’s persistence to follow through on his pact with the people – even though some decided against him.

“He wanted to make sure he made it to all of his caucus meetings on time,” he said. “He wanted to continue to make the right votes.”

Shelley’s brother shared a lighthearted memoriam that provoked laughter and tears among the hundreds of mourning celebrants. First off, he apologized to the synagogue because he accidentally used a yarmulke as a handkerchief – to crowd chortling.

“I’ve never felt so dumb as when I played Trivial Pursuit against John,” he said. “It was like playing against Google.”

He recalled Adler’s near-brush with Jeopardy fame that fizzled after the former Congressman paid out of pocket to fly out west for a taping. Once he made it into the make-up room, a lackey asked as a formality whether Adler knew anyone who worked for ABC. He said, yes, he thought so. Adler told them he went to law school with a friend who he thought may have taken a job at the station – which was enough for the crew to send him packing.

His brother-in-law, a West Coast entertainment businessman, said, “You flew all the way out here on your own dime – why on earth would you ever want to tell them that?”

Adler replied: “Because I didn’t want to lie.”

Emotionally debunking the myth of “fat cats” in Washington D.C., his brother-in-law told the story of Adler’s air mattress in his office. He didn’t want to spend for an apartment to conserve his family’s finances, the brother said.

Adler was “the smartest man I knew,” he said, which made it even more confusing knowing that Adler was a lifelong Democrat vying for office in a Republican district: “That’s like running a ski shop in Miami.”

He called on the somber crowd to honor Adler in the parlance of his industry: a standing ovation. They obliged.

Two of his four sons also spoke. The eldest, Andrew, emotionally recalled how much joy his father would get from doing the mundane family things, like attending his soccer games, yelling some absurdity onto the field at tense moments. “I will always miss him,” he said. “But I know he was always proud of the ones he loved.”

The rabbi concluded the ceremony with a poem, ending: “Perhaps my time seemed all too brief, don’t lengthen it now with undue grief. Lift up your hearts and share with me, God wanted me now, he set me free.” 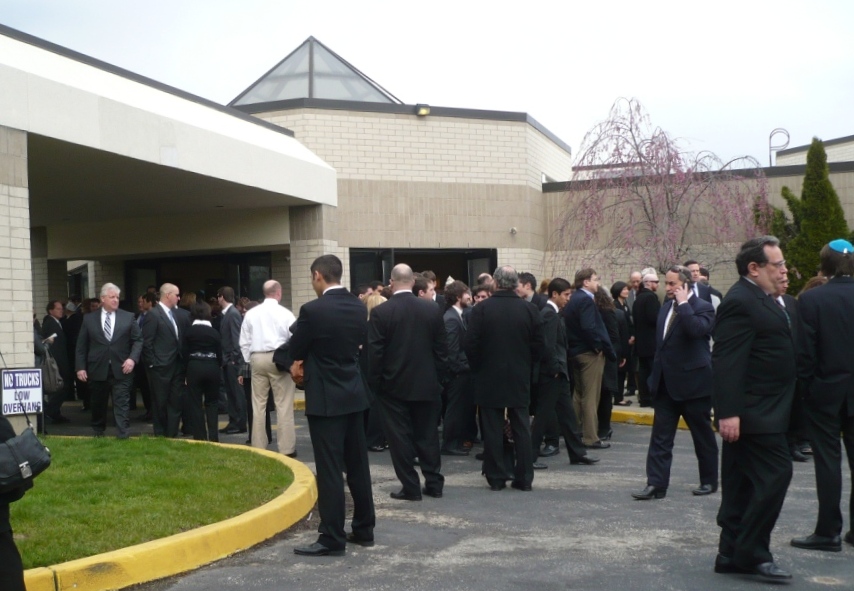