The downtown councilman notched his second straight school board victory in as many years as his three canddiates easily won seats on the Jersey City School Board to give the future mayoral candidate control of the governing body. JC Mayor Jerry Healy rightly pointed out in the aftermath that one of Fulop’s three candidates was an overlapping ally, giving the mayor – for what it’s worth – 1-2 bragging rights on the night. Better than getting swept, at least. In the meantime, Fulop has momentum with three years to go before 2013.

The affable assemblyman backed a slate of Board of Education candidates that clocked Mayor Dawn Zimmer’s BOE prospects. It’s a long, long way off, but that’s still good news for the man many believe will challenge Zimmer for mayor in 2013.

When almost every African-American elected official in the city – from the congressman to the senator and assemblywoman and ex-mayors to council people – backs the same school board ticket and Baraka’s name consistently comes up as the ring leader, that’s a brand name win for the South Ward councilman. Provisional ballots remain to be counted, but Baraka’s schools advisory ticket appears to be positioned for a 2-1 victory over Steve Adubato’s slate.

The no-nonsense Drinker Biddle attorney notched a GOP win in federal court on Thursday when U.S. District Judge Noel Hillman decided he would not interfere with Secretary of State Kim Guadagno’s decision to boot former Olympian and Democrat Carl Lewis off the 8th Legislative District ballot.

The Senate Judiciary Committee this week signed off on the deputy commissioner of health to replace Poonam Alaigh as Department of Health and Senior Services (DHSS) commissioner. Alaigh stepped down at the end of March for personal reasons.

Eight days before Gov. Chris Christie signed a bill into law effectively exempting resort operators from liability from a requirement that skiers under 18 wear helmets- a key sticking point for the industry in the past – the state’s largest ski resort dumped $150,000 in state GOP coffers.

First Secretary of State Kim Guadagno ruled he has not proved his state residency cred in order to qualify as a state Senate candidate in the 8th Legislative District. Then a federal judge backed up Guadagno’s decision by refusing to get involved. It’s not over – this morning, Lewis’s attorney, William Tambusssi, filed an appeal in the 3rd Circuit Court – but the track legend is running out of time to get on the ballot. Next Friday is the drop-dead deadline.

The Senate President told State Street Wire that he is pulling a moratorium for the State Health Benefits Plan from his public employee health care reform bill, S2718, a week after the New York Times detailed Sweeney’s close relationship with South Jersey powerbroker George Norcross, and the benefit to Norcross’s insurance brokerage firm from the hold on entrants into the state health care plan.

The powerful Ocean County Republican chairman ate a loss in Toms River Wednesday night as GOP-backed candidates shackled to Mike Ritacco allies lost to a slate of newcomers. Ritacco is the disgraced former schools superintendent making $347,000 a year under the terms and conditions of his school board-approved contract. This is local, low level business for countywide octopus Gilmore, but a loss is a loss.

In another Dwek case, the former Guttenberg councilman and police officer from Fairview admitted this week to laundering approximately $125,000 in funds that he believed were criminal proceeds, according to U.S. Attorney Paul J. Fishman.

Beloved as a TV star but repelled by local chess pieces, the politically radioactive mayor of Newark all but sat out the Schools Advisory Board elections. He had at least one operative ally in the field trying to fool voters in the East Ward, but otherwise the mayor was an ethereal after-thought on Wednesday. 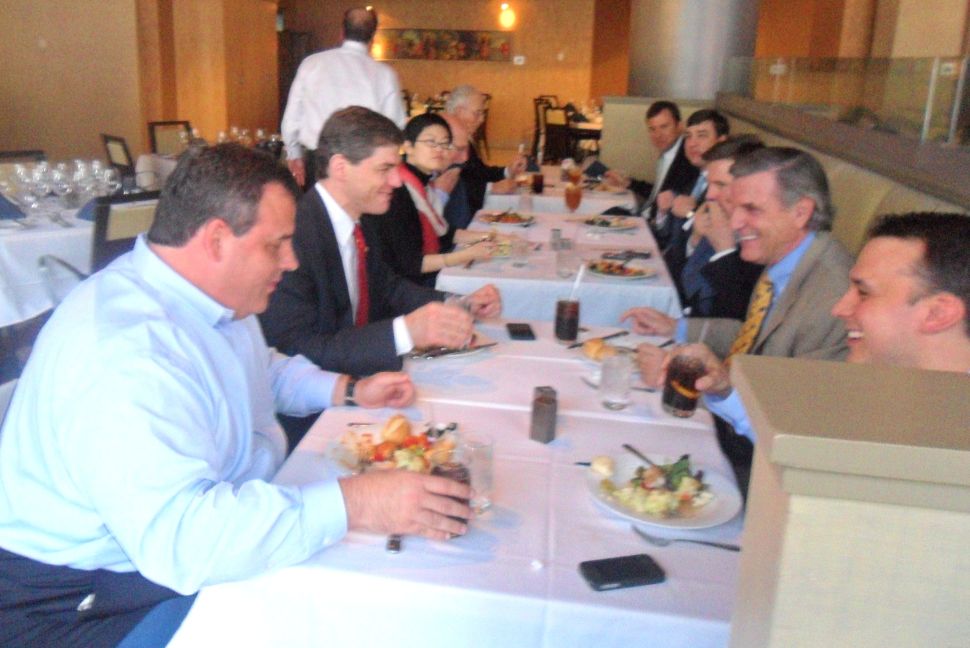