His return to Middlesex County Tuesday night didn’t exactly conjure up images of Julius Caesar going back to Rome following his victories in Gaul, but despite the elbow-to-the-jaw post-redistricting homecoming, Wisniewski was the quarterback of the winning team. It may rankle Woodbridge and gnash teeth in Blue Jersey land, but the state party chairman going into the redistricting war was the underdog, and he came out of it victorious.

The natty South Jerseyan projected MVP from the time he joined the Democrats’ redistricting team and immediately went on offense. To the bitter end, he proved a vital inside player to help land the Democrats the map.

Steven Goldstein wanted the heads of state Sen. John Girgenti and Sen. Sean Kean mounted on his living room wall, and he got his wish – in both cases. Both no votes on marriage equality in 2009, Girgenti was redistricted into retirement and Kean forced to return to the lower house after getting thrown into the same district as state Sen. Robert Singer (R-30).

The veteran member of the Assembly received the backing of the Passaic Democratic Committee this week to run for the state Senate in the heavily Democratic 35th District. Pou’s ascent, in addition to what looks like a possible pickup of a Latina in the 36th District with the establishment lined up behind Marlene Caride, also blunts the threat of a legal challenge by the Minority Coalition.

The former mayor of Lyndhurst weathered his first political firefight as Democratic chairman of hard-charging Bergen County, and he did it with a grin, as if he actually enjoys political combat.

The 36th District senator was a winning member of the redistricting commission, succeeded in making his district slightly more Democratic, and helped secure support for Ridgefield prosecutor Marlene Caride. Granted, Caride’s not in yet, and if she backfires at Sunday’s convention, Sarlo will be a loser next week, but the South Bergen senator helped maneuver her into position at the urging of the state Democratic Party.

With backing from four county chairs (including himself), the Old Bridge Assemblyman is on course to become senator in the newly forged 12th Legislative District. Thompson’s kick upward would also give the GOP senatorial courtesy in unwieldy Middlesex County.

The sonorous 13th District Republican senator was one of the few Republicans who got a beefed-up GOP district out of the process. The 13th is now arguably the safest Republican district in Monmouth.

The western county movement conservative senator picked up Republican stronghold Bridgewater in redistricting, and then, with the solid backing of Warren County GOP Chairman Doug Steinhardt, beat down an attempt by Hunterdon County GOP Chairman Henry Kuhl to get him dumped from the line in the tumult following redistricting. It was a frazzling week for Doherty and it remains to be seen if he can gel with the prim and proper Somerset crowd, but if he can, he lands an enviable power projection platform for statewide office.

The mayor of Maywood outdueled Hawthorne Dem Municipal Chairman Jeff Gardner to earn the backing of power players in his quest for a 38th District Assembly seat on a ticket with state Sen. Bob Gordon (D-38) of Fair Lawn and Assemblywoman Connie Wagner (D-Paramus).

The Monmouth University pollster and political scientist provided expert commentary on this site from the beginning that, based on his reading of Dr. Alan Rosenthal’s writings, predicted perfectly the conclusion this past Sunday.

Left for dead like Terry Malloy at the end of “On the Waterfront,” the Ridgefield mayor walked out of court freed from federal corruption charges, and this week held court as state party players kissed his ring and politely urged him to make a legislative pick for the newly configured 36th District. Suarez selected loyal soldier Marlene Caride.

The Republican governor stormed the Heldrich Hotel and tried to get tiebreaking member Prof. Alan Rosenthal to see the map his way. It proved a losing effort, as Rosenthal chose a map that mostly protects Democratic Party incumbents and makes it more difficult for Christie to get the Republican Legislature he craves.

The 35th District senator was the lone obvious Democratic Party casualty in the aftermath of redistricting. It was a heartbreaking end for Girgenti, who, probably unfairly, sustained months of negative press that softened him up in the minds of redistricting commissioners and made it easier for them to hit the eject button on his career.

The state lost a highly regarded figure this week when former U.S. Rep. John Adler (D-3) died following heart surgery. It was a shocking story that saddened many on both sides of the aisle as friends and political foes alike remembered an impassioned everyman with a wonderful intellect and sense of humor whose encyclopedic knowledge, Harvard resume and yet undeniable embodiment of blue collar New Jersey values made him a political winner and perennial Democratic Party champion.

The powerful Essex County executive took a drubbing when news reports revealed that he is simultaneously drawing a hefty public salary and retirement pension. That was bad enough. Then Democratic Party Chairman Phil Thigpen selected Assemblyman Ralph Caputo over DiVincenzo acolyte Assemblyman Kevin Ryan in a LD 28th head-to-head that infuriated the exec.

The well-regarded sheriff’s deputy from Nutley lost the power nod for re-election after Assemblyman Ralph Caputo (D-Belleville) said he would move to Nutley to stay in office. It was a sad and sudden ending for a legislator who had already earned the affection and respect of his running mates.

Up for re-election this year, the embattled Hoboken councilman seems to encourage a donation from disgraced developer Solomon Dwek on an FBI surveillance video released this week, which has given the ever dogged politicos in the mile-square city a truckload of ammo to fire on Russo.

The Union City political animal lost the map he wanted, which would have kept West New York and Gutenberg in the 33rd District. Stack’s political prowess will stand him in good stead as he builds in his share of Jersey City now, and given his track record, the ultimate consequence of redistricting will likely simply mean more power for the mayor/senator. But it’s still a map he didn’t welcome.

Redistricting forced the rising GOP star from LD 11 to stand down when faced with the prospect of running against veteran state Sen. Robert Singer (R-30) of Lakewood.

The veteran Assemblywoman was in the mix as a replacement for Assemblywoman Caridad Rodriguez in the newly formed 33rd district, but lost her bid to police detective Sean Connors, favored by the Hudson County Democratic Organization (HCDO). 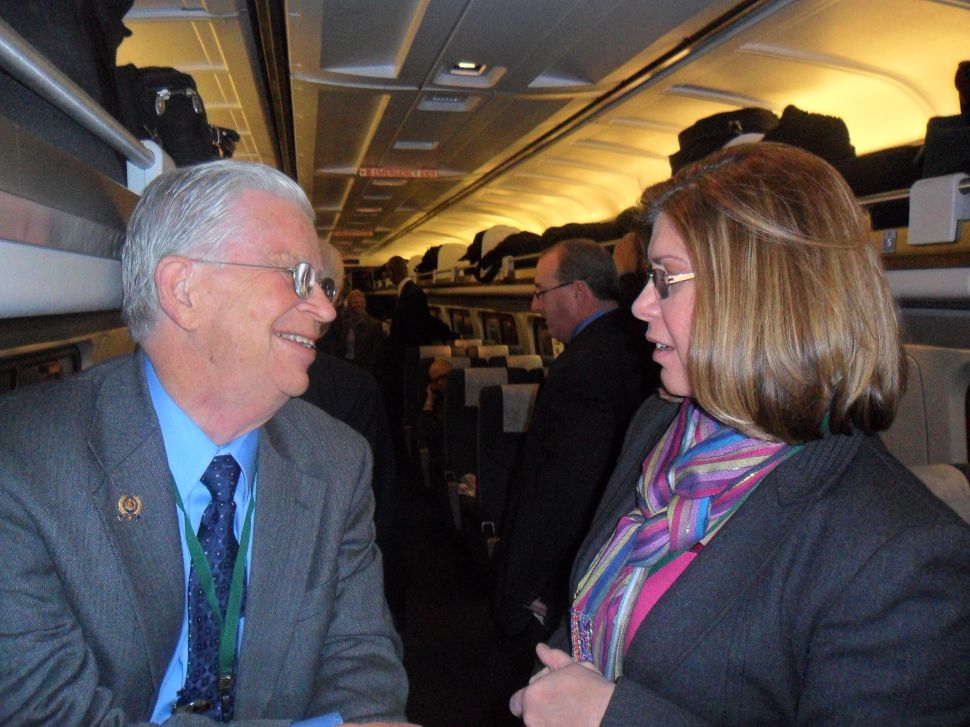