WEST NEW YORK – The tall smiling man stood above the crowd as he walked and waved and, with apparent deepening satisfaction, heard the chants of “Albio! Albio! Albio!”

This was the swearing-in ceremony of Mayor Felix Roque, an event made more theatrical by the presence of Republican Gov. Chris Christie, who wouldn’t mind adding Roque to a stable of recalcitrant Democratic Party North Hudson allies that include upstarts state Sen. Brian P. Stack (D-33) and Hoboken Mayor Dawn Zimmer.

But Sires stood out as the key power piece on a shaken up chess board as he basked in the crowd’s effusive homecoming greeting, and enjoyed a certain satisfaction by virtue of having stayed neutral in Roque’s stunning upset earlier this month of local Hudson County Democratic Organization (HCDO) standard bearer Mayor Silverio “Sal” Vega.”

Although he didn’t publicly, Sires could have gloated here today and no one would have protested.

He may have gotten some high fives.

A stoic HCDO ally, Sires following his successful 2005 congressional bid nevertheless suffered a protracted series of Vega disses and some of these people in this evening’s aging but reanimated crowd suffered with him. Those troubles bear no retelling here, only to say that the disrespect started after Sires abandoned his mayor’s seat and headed for Congress. It was bad enough when Vega took Sires’ portrait down in Town Hall. Then refused to appoint his predecessor’s recommendations to the commission. He dumped Caridad Rodriguez and her DPW husband out of Town Hall along with numerous other Sires loyalists. But the most damning cut might have been when Vega forced Sires’ wife out her job as assistant superintendent.

Faced with the prospect of an unknown renegade like Roque, U.S. Sen. Bob Menendez (D-NJ) backed Vega in his re-election bid this year and essentially became the face of the campaign. Having already backed Stack against Vega in their 2007 senate showdown and listened to the subsequent threats that the move meant he was doomed as a congressman, Sires decided this time to stay out of local politics. He was a friend of Roque’s, but he wouldn’t back him against the HCDO.

Still, his neutrality – when contrasted with Menendez’s full-fledged and aggressive endorsement of Vega – resounded.

“They worked very hard to make a change in West New York,” the congressmen said of Roque’s commissioners moments before swearing them into office. “And you the people of West New York responded to that change.”

Tonight, there was some quiet teeth gnashing among HCDO operatives who heard reports of Sires onstage with Christie.

“He introduced him?” shrieked one establishment ally under some duress at the thought.

Teased with a question about his presence in the overwhelmingly Democrat North Jersey stronghold, the Republican governor earlier today said with a grin of delight, “even I’m not that ambitious” when asked of his political designs on Hudson County, though he still sees opportunities to minimize Democratic Party vote totals for his 2013 re-election. Dogged by headlines today reporting a federal raid at Hoboken City Hall, Zimmer said no comment and stuck close to the governor as he received modest, polite applause before wading into the crowd as soon as he’d sworn-in Roque; while sources of course credit Stack, also sitting in the front row, with brokering the meeting between Christie and Roque.

Yet finally it’s Sires who occupies – and has always occupied that mysterious political land between the cob-webby halls of the HCDO and the elusive Stack, and as such he represents the one public figure capable of instructing the neophyte Roque in the art of negotiating both realms.

Each side wants Sires to exert an advantage for one over the other.

“He’s the conduit to the HCDO,” said one HCDO operative, in reference to Sires. “Roque can be like Stack and go with the governor, or he can get to the HCDO with Sires and Sacco.”

In the crowd tonight as Roque choked up with the singing of “God Bless the USA,” outcast operatives long at odds with the HCDO mused on forging connective tissue to the new mayor.

“I wonder if he’s smart enough to realize how powerful he is,” said one, pointing to Roque onstage. “He can start the snowball and take down the entire HCDO after what he did to Vega.”

The HCDO has tried to stem Stack’s power, wrenching him away from West New York during the redistricting process, awarding the town to Stack’s chief rival, neighboring state Sen. Nick Sacco (D-32), the HCDO power broker, who dispatched Assemblyman Vincent Prieto (D-32) in his stead this evening to the Roque event. Sacco sat down with Roque after the election and, in the words of an insider privy to the encounter, found the meeting pleasant and productive, just as Stack moved in early on Roque and defiantly vows to maintain a civic association constituent services office in West New York even after he cedes the town to Sacco on the map starting next year.

When Sires stands with the governor and Stack, the worry, said an HCDO source, is not that he will revert back to the mid-1980s version of himself and switch parties. After all, he is vice chairman of the Democratic Congressional Committee and the Hudson numbers, as Christie himself recognizes, place the county in the out-of-range category, especially with 2012 upcoming and President Barack Obama, Menendez and Sires all on the ballot.

The fear is only this: that Sires with Roque and the West New York revolution will empower Stack, who earlier this week held a Union City First event bigger than the pre-election bash he staged last year as he prepares, in the words of one of his allies, to take total control of the bigger portion of Jersey City he just absorbed into his district.

Those questions clung to the underbelly of the ceremony, in which Roque paid special tribute to Sires.

“The person who made this town a great town years ago,” said the new mayor, welcoming the congressman to the lectern, where Sires stood, straddling a tortured political landscape and dominant above the crowd.

Later Thursday night, he was seen in Jersey City, late, but loyally in attendance at an HCDO event for incumbent state Sen. Sandra Cunningham (D-31). 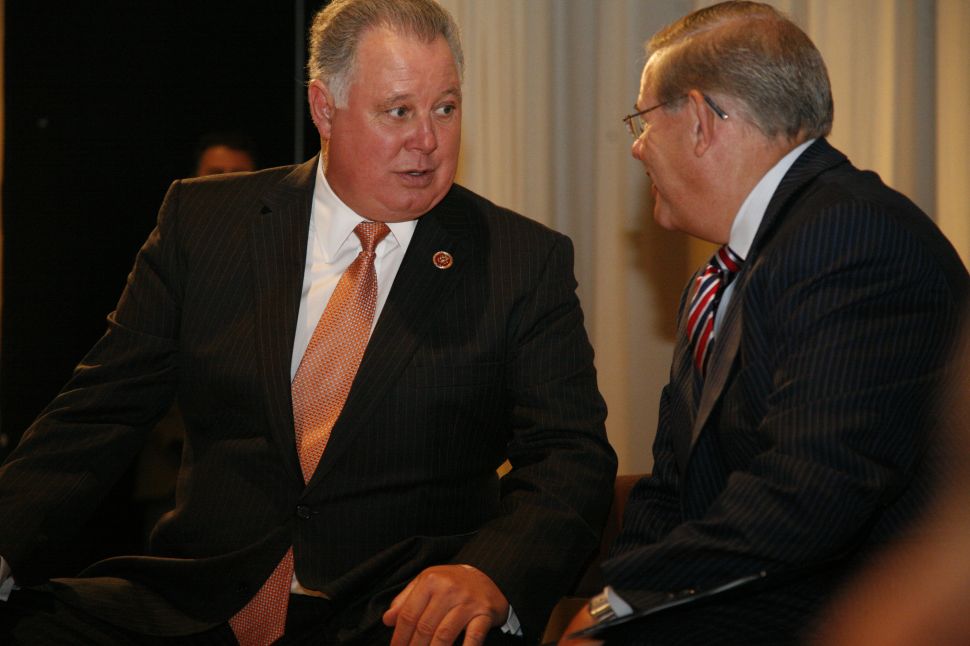